A reawakened Russian bear is seeking to reassert the former superpower’s clout by extending influence in Eastern Europe, the Middle East and Latin America. This has seen Putin’s administration support an assortment of pariah regimes and separatist movements as it pushes to extend its international influence. While much of this has been portrayed by Moscow as an attempt to aid allies and extend Russian influence in order to ensure the integrity of its borders, the core motivation appears far more hard-nosed, the desire to gain greater control over lucrative global energy reserves.

Russia’s success in Syria, where it supported President Bashar al-Assad’s beleaguered government, saw it secure considerable political influence and access to valuable oil and natural gas reserves. That success has provided a guiding structure for Moscow’s plans to extend influence within Latin America and gain greater control of the region’s extensive hydrocarbon reserves. It is Venezuela and the embattled dictatorial regime of President Maduro which is attracting the lion’s share of attention. The reason is quite simple; the petrostate, which once had Latin America’s most advanced economy, possesses the world’s largest oil reserves of over 300 billion barrels. If Moscow gains measurable influence over Caracas, it can obtain control of those copious reserves extending its regional political standing and ability to influence global oil prices.

For Russia, which is a nation where oil and natural gas are around 60% of exports and responsible for generating up to 30% of gross domestic product (GDP), the benefits are decidedly apparent. Even more so, when it is considered that Putin’s government is facing an economic crisis triggered by oil’s prolonged slump. Moscow has taken a surreptitious approach to extending its influence in a region long considered to be the U.S.’s sole domain. Venezuela’s economic collapse and failing oil industry, which is the nearly insolvent petrostate’s only source of export earnings and hard income, has forged the ideal environment for Russia to extend its influence in Latin America.

Moscow has stepped in as a financier of last resort for Maduro’s embattled regime, providing last minute loans, arms and cash bailouts in exchange for acquiring interests in local oil fields and the crown jewel, Venezuela’s national oil company PDVSA. Russian state-controlled energy company Rosneft has extended billions of dollars in loans to PDVSA that need to be repaid through the provision of oil supplies by the end of this year. There are signs that sharply declining production and ongoing mismanagement at PDVSA will derail efforts to meet those obligations, providing Rosneft with the opportunity to take over the beleaguered oil producer. In order to ensure the repayments are met Rosneft is already the top trader of Venezuelan crude and is acting as a key facilitator to allow Caracas to avoid U.S. sanctions to access global oil markets.

If Rosneft takes control of PDVSA, it would provide Venezuela with another means of avoiding U.S. sanctions that have forced its tankers to go dark by turning off their transponders to cloak their cargoes of crude. Caracas, upon finding itself in dire economic straits, has reportedly considered handing control of PDVSA to Rosneft in exchange for further financial aid and having a large portion of its debts extinguished.

There have been claims that Maduro wants to hand PDVSA over without going through the hassle of privatizing the company, but for such a deal to proceed it would need to be approved by the opposition controlled National Assembly. While Rosneft has stridently denied that it plans to take control of PDVSA, doing so would give Moscow considerable political leverage, not only regionally, but also over OPEC and international oil prices. This comes at a time where Russia is looking to boost oil production to make up for a fiscal shortfall and bolster an already fragile economy.

There are indications that Moscow won’t agree to deepen cuts to its oil output at a meeting with OPEC nations next month, making it imperative to gain greater influence over the cartel, which can be achieved by controlling greater quantities of oil.

Russia’s plans don’t stop with Venezuela, political and economic crises are erupting across the region engulfing Nicaragua, Argentina, Bolivia, Chile and Colombia, providing ample opportunity for the Putin administration to extend its influence. This forms part of Moscow’s calculated plans to erode U.S. influence in its traditional stronghold of Latin America. Russia has established a solid foothold in the region outside of Venezuela, having made considerable investments in the energy industries of Bolivia, Mexico and Argentina.

Russian political consultants allegedly provided support to recently ousted Bolivian President Morales during the hotly contested and reputedly fraudulent elections which saw him elected to a fourth term last month. The return of a leftist Peronist government in Argentina in place of the business-friendly centrist administration of President Macri has created an opportunity for Moscow.

Peronist governments in the economically unstable Latin American nation have long held an antagonistic attitude to the U.S.

Then there are Argentina’s pressing economic issues including ousted President Macri’s failed reforms, a worsening balance of trade and deepening economic crisis which is pressuring Buenos Aires to urgently tap the nation’s abundant unconventional oil and natural gas reserves. Those factors have created an ideal environment for Russia to boost its influence in Argentina providing it with the prospect of strengthening ties with Latin America’s fourth largest economy.

Rosneft’s extensive expertise and capital could act as a powerful force to unlock the considerable unconventional hydrocarbon reserves held by the Vaca Muerta shale formation. That would be very enticing for Argentina’s economically hard-pressed government which is desperately seeking sources of fiscal revenue to prop-up the country’s increasingly fragile economy.

Moscow’s behavior in Latin America mirrors that of the Soviet Union at the height of the Cold War. While Russia lacks the economic muscle to wield the same influence as China, it is seeking to capitalize on anti-U.S. sentiment in the region that will allow it to build profitable trade relationships to bolster a weak economy. Russia’s steady progress indicates that it is determined to gain greater control over Latin America’s vast oil and natural gas reserves which it can use as an economic weapon to influence U.S., Chinese and OPEC policy and global energy prices. 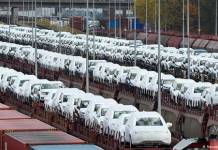 US tariffs on autos not mentioned in talks, EU trade chief says