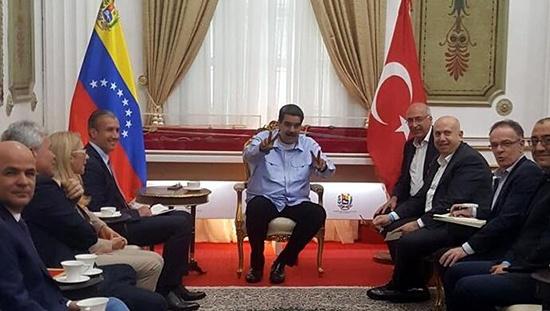 The delegation, which includes 11 Turkish companies, held high-level talks in Colombia and Venezuela and signed several export deals with more than 200 local companies in the two Latin American nations.

“This was a very fruitful 10-day visit, covering Venezuela and Colombia,” said Ali Can Yamanyılmaz, the head of the Mediterranean Fisheries and Animal Products Exporter Associations (ASHİB).

“We had meetings with over 1,000 businesspeople from more than 200 wholesale food importing companies in Caracas and Bogota,” Yamanyılmaz added.

The Turkish fisheries industry’s export revenues amounted to $2.5 billion last year and the main export market for local companies were Iraq and the Middle East nations, he said, adding that the turmoil in instability in this region forced Turkish companies to find new markets.

“We have identified Africa and Latin America as alternatives to the Middle Eastern market. We see Venezuela and Colombia as a gateway to a wider Latin American market,” he said.

“We are ready to cooperate in every field,” Maduro told the Turkish delegation at the meeting in Caracas, according to Yamanyılmaz.

“Maduro welcomed us very warmly, almost all ministers from his cabinet were present at the meeting,” said Yamanyılmaz.

The Turkish delegation and Maduro discussed the bilateral trade ties between the two countries in the meeting which lasted more than an hour, according to Yamanyılmaz.

“Maduro invited Turkish companies to invest in Venezuela, which has vast oil, gold, aluminum and copper reserves. The president noted that Venezuela also offers huge opportunities in other sectors, particularly in the food, steel and iron, as well as textile,” Yamanyılmaz said.

Yamanyılmaz underlined that Turkey’s exports to Venezuela stand at around $120 million, $72 million of which come from food exports.