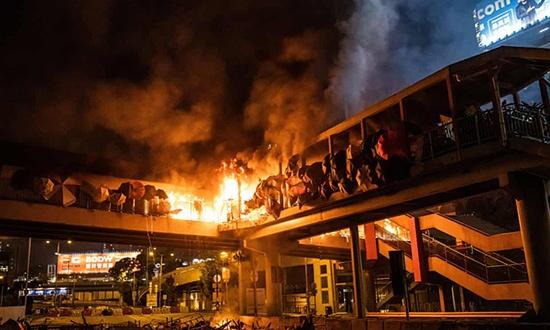 The territory’s recession is getting deeper and the US is threatening its special trading status, bringing serious consequences for Beijing

The protests in Hong Kong are costing the local economy dear and could damage China’s ability to do business internationally. Photograph: Emilio Navas/SOPA Images/REX/Shutterstock

Almost six months after the protest movement that has upended life in Hong Kong began, the region is now facing serious questions about its future as Asia’s leading international business centre.

The most recent violence in the autonomous Chinese region have been the worst disturbances of the six-month long pro-democracy protests. US lawmakers have passed legislation threatening Hong Kong’s special trading status and the territory has slumped into its worst recession for 10 years.

With next year shaping up to be even tougher, the protesters appear to have achieved the ambition expressed in a recent poster on social media this week. “Squeeze the economy to increase pressure,” it urged.

Trade and commerce is the lifeblood of Hong Kong but it is bleeding badly. The economy is expected to shrink by 1.4% in 2019 and economists think growth could wither by as much as 3% in 2020 without a big fiscal stimulus.

The retail and tourism industries, which have thrived in tandem with Chinese visitors spending freely in the city’s shops, are suffering particularly badly.

Visitors through the airport are down 13% and the most recent retail sales figures showed that they fell 18% in September compared with a year earlier. The numbers were made more tangible last week when Hong Kong-based airline Cathay Pacific issued a profit warning for the second time in a month, blaming the turmoil in Hong Kong for a 35% decline in the number of passengers arriving in the territory last month. On the same day British luxury clothing company Burberry said its Hong Kong sales were down more than 10% and it had slashed £14m off the value of its 12 stores there. Even an international golf tournament was called off.

But although the leisure sector may have landed in the rough, the decision by the US Congress to pass the Hong Kong Human Rights and Democracy Act could represent a more significant long-term threat to the territory’s economic fortunes.

The bill has infuriated Beijing as an “intervention” in its affairs but despite the delicate stage of US-China trade talks, Donald Trump is expected to sign the legislation because of its near-unanimous backing in Congress. The bill means the US would make an annual check that Hong Kong has sufficient autonomy from Beijing to qualify for the special US trading consideration that bolsters its status as a world financial centre. It also gives officials the power to levy sanctions against officials responsible for human rights violations in Hong Kong.

A second bill, which the Senate also approved unanimously on Tuesday, would ban the export of certain crowd-control munitions to Hong Kong authorities.

George Magnus, the former chief economist of the investment bank UBS and now an associate of the London School of Economics’s IDEAS thinktank, said the legislation was potentially damaging for China.

“Hong Kong is China’s financial window on the world, and vice versa. The territory lends China capital, clout and kudos. All of this is now at risk.”

The consultancy Capital Economics said the bills highlighted a growing feeling that Hong Kong’s autonomy was “deteriorating” and could persuade some firms to look for new accommodation in east Asia.

“The bill itself would not directly reduce the territory’s international status unless other countries follow suit,” Capital said this week. “But it could lead the large number of foreign firms operating in the city to increasingly focus their energy on other Asian financial centres with less uncertain outlooks.”

Ben Bland, a research fellow at the Lowy Institute in Sydney and the author of Generation HK: Seeking Identity in China’s Shadow, said that although Hong Kong remained a good place to do business, the passing of the US bill was a potential game-changer.

“There are the bigger black swan questions, especially after the US bill was passed. The risk increases that the US might withdraw the special privileges on trade access to the US. If that did happen it would have a very, very damaging impact on the Hong Kong markets and business.”

And yet, Hong Kong, a key conduit for businesses into mainland China, is showing few outward signs of economic woes other than its poor GDP readings.

The local stockmarket, the Hang Seng, which is the fifth biggest in the world by value of the listed companies, has wobbled from time to time but overall it has lost only 2.2% since the protests turned violent in June. Nor are there any telltale signs that wealthy residents are moving their cash out of Hong Kong, where property prices remain extremely high despite the turmoil.

Britain’s biggest company, HSBC, once the Hong Kong and Shanghai Banking Corporation, started life in the city and it remains its biggest market, bringing in more than half of its $20bn pre-tax profits last year. The territory also generates around 40% of the near-$4bn underlying profits of another large UK-listed bank, Standard Chartered.

Some of their more wealthy clients are understood to be opening foreign accounts in more stable places, like Singapore, but so far the outflows are said to be limited.The banks will certainly want to stand firm, to grow their Asian business , because it churns out higher returns than Europe and the US.

Standard Chartered admits it is “unrealistic” to think the protests will not hit its business. Some of the lender’s business customers, like local retailers, are particularly vulnerable.

But HSBC’s interim chief executive Noel Quinn insisted last month that the bank’s commitment to the territory was unwavering: “At different times throughout our 154-year history, both Hong Kong and the UK have faced significant challenges, and HSBC has done whatever we can to help them through to the other side. HSBC has always taken a long-term view and will continue to do so,”

But with most experts agreed that Beijing will not back down and allow Carrie Lam’s government to give concessions to the pro-democracy groups, it is hard to see how the situation can be resolved quickly and pull the economy back from a disastrous, prolonged recession.

Dan Harris, a lawyer at the Seattle firm of Harris Bricken who has done business in the region for decades, says the ongoing protests mean Hong Kong as an international financial centre is “no more”.

“It’s finished as an international business centre because it was based on trust, safety and the rule of law and that’s all gone. Companies are looking to leave. No one is thinking of moving in,” he said.

He also believes there is no appetite in Beijing to save the way Hong Kong is currently established. After all, it only accounts for 3% of the mainland’s economy, compared with 11% at the time of the handover from the British in 1997. Harris thinks forceful intervention by the mainland is inevitable.

“There is no resolution to this. China does not care about Hong Kong. A lot of people in Beijing hate the place and they want to put it in its place. Who’s fighting for Hong Kong? Not many people. China is not backing down because they want to send a message to Xinjiang and Taiwan.”

Andrew O’Neil, professor of politics at Griffith university in Australia, said despite its problems, Hong Kong remained resilient and had retained its flexibility and legal structure. Intervention, he felt, was unlikely because of the massive cost to Beijing.

“But it’s still not certain. If you’d asked six months ago would the army intervene if there were battles in the street and the authorities losing control of infrastructure, then most would have said yes. But they haven’t and a lot of people think that is significant. The question is how much more it has to escalate before the PLA intervenes?”