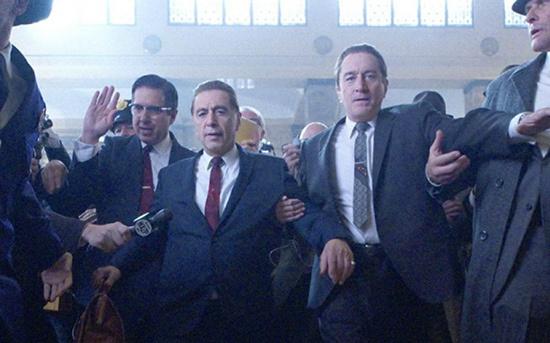 Stories about the mob have become offers that Hollywood cannot seem to refuse.

“The Irishman,” Martin Scorsese’s new movie arriving on Netflix on Wednesday about the Bufalino crime family and famed union boss Jimmy Hoffa, marks the latest entry in a genre that has fascinated audiences and filmmakers for decades.

Pop culture watchers say that is hardly surprising given the combination of crime, family, violence and the American Dream that Hollywood tales about the Mafia offer.

“It’s a genre that really hits that sweet spot between a fascination with crime and a set of relatable family dynamics,” said David Schmid, editor of “Violence in American Popular Culture” and an associate professor of English at the University at Buffalo.

“The Irishman,” starring Robert De Niro, Al Pacino and Joe Pesci, follows offerings ranging from “Little Caesar” in 1931 to “The Godfather” and “The Sopranos” that have reaped rewards both at the box office and at awards.

After strong reviews, Scorsese’s return to the kind of Italian-American territory he explored in “Goodfellas” and”Casino” is expected to be a leading contender at next year’s Oscars.

“In many ways, the Mafia took over from the Western as the great American epic,” said Robert Thompson, pop culture professor at Syracuse University. “It’s about the settling of the urban frontier as opposed to the geographical frontier, and it’s also a great immigration story.”

Large Italian-American families, often gathered around dinner tables heaving with pasta, give audiences strong characters to root for, even if they are on the wrong side of the law.

Mafia films also give a twist to the classic American immigrant story of arriving in a new country, having to fend for one’s self and working hard to achieve goals, Thompson said.

When HBO’s TV series “The Sopranos” ushered in the notion of an emotionally conflicted mob boss, it deepened the morally ambiguous territory that mobsters inhabit on screen, but which helps make them so appealing.

“The reason these neurotic Mafiosi resonate with us is that we can all relate to being in a job that we don’t want to do,” said Schmid.

Yet, while violence is a key part of the package, there is often less blood-curdling violence than other action movies.

“If you were to make a really explicitly violent Mafia movie, that wouldn’t be so popular with the audience,” said Schmid. “The audience would prefer to be carried away by the romance of the quintessentially immigrant narrative where a person goes from nothing to becoming a godfather.”