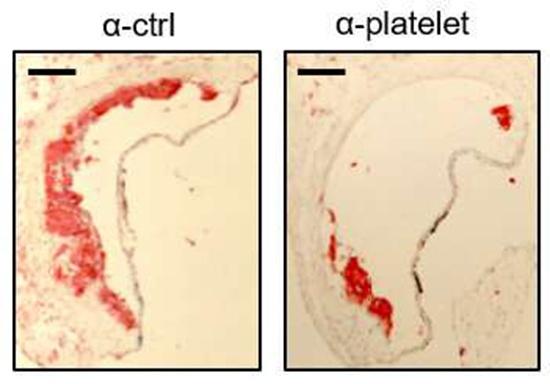 The Lipid Hypothesis of coronary artery disease has long held that a high level of cholesterol is the causative factor of atherosclerosis, but a group of New York scientists is making a powerful case for platelets as the trigger of an artery-damaging inflammatory response.

Heart disease, a term that refers to a vast number of complex conditions, is most frequently used to define coronary artery disease, or atherosclerosis. The condition is a leading cause of cardiovascular deaths in Western countries and is marked by arterial deposits of plaque, which is composed of cholesterol, fatty material, calcium deposits and a motley collection of biological debris.

Over time, plaque not only hardens, but causes afflicted arteries to narrow, limiting the free flow of oxygen-rich blood. The Lipid Hypothesis, which continues to hold sway, is also known as the Cholesterol Hypothesis. It isn’t, however, the entire story of how plaque forms and narrowed arteries set the stage for heart attack and stroke.

Scientists at New York University School of Medicine have been investigating the role of platelets in the evolution of atherosclerosis. Platelets are tiny, sticky cellular fragments whose key function is to aid the formation of blood clots. In injuries that cause bleeding, platelets are necessary to clot blood at the wound site.

But the NYU researchers are finding that platelets have functions beyond those involved with preventing severe bleeding. These sticky little fragments play a big role in inflammation and plaque.

Drs. Tessa Barrett and Jeffrey Berger of the Marc and Ruti Bell Program in Vascular Biology at NYU investigated platelets and platelet activation. They were particularly interested in how platelets promote inflammation and spur the development of macrophage-platelet aggregates. All are key actors in the development of plaque, the scientists say. While the Lipid Hypothesis provides a foundational understanding of atherosclerosis, it doesn’t provide an intricate understanding of a sometimes deadly drama that plays out in affected arteries.

Detailing their findings in Science Translational Medicine, Barrett and Berger, along with a team of NYU cardiovascular investigators, explained how a range of molecular processes can lead to the types of blockages that underlie coronary artery disease.

The scientists found, for example, that white blood cells are not innocent bystanders in the cascade of events that leads to atherogenesis, the formation of plaque in arteries. The team identified monocytes and macrophages as constituents with noteworthy roles.

A mini-lesson in cell biology is necessary at this juncture to better understand those cells. Monocytes are precursors to macrophages. Both are leukocytes—white blood cells—and both are also called myeloid cells.

“Activated platelets locally release a host of inflammatory mediators that support the chemotaxis, adhesion and transmigration of leukocytes to sites of inflammation,” wrote Barrett, lead author of the research. Chemotaxis refers to the movement of leukocytes into areas of the vessel with high inflammation.

Additionally, the NYU investigators also found that platelets have an influence on a protein known as SOCS3. And platelet regulation of myeloid SOCS3, the team discovered, accelerates the development of atherosclerosis.

Although platelets are crucial to the development of atherosclerosis, they are not necessarily part of thrombosis—forming clots in arteries, the team found. “Our findings define an atherogenic role of platelets and highlight how, in the absence of thrombosis, platelets contribute to inflammation,” Barrett reported.

Working with specially bred Ldlr mice that were fed a Western diet, the team found that “platelets drive atherogenesis by skewing plaque macrophages into an inflammatory phenotype.” This, in turn, influences SOCS3 expression, the team found.

Translating their data to humans with cardiovascular disease, the investigators discovered that among women who had heart attacks, there was an increase of the SOCS3 protein and a concomitant increase in monocyte-platelet aggregates.

A second group of patients with atherosclerosis in vessels in their legs also demonstrated evidence of elevated SOCS3 proteins, elevated platelet activity, and inflammation. Collectively, the data provided a causative link between platelet-mediated myeloid inflammation and dysfunction, SOCS3 and cardiovascular disease.

“Recruitment of monocytes to the sub-endothelium and their subsequent differentiation to macrophages are key steps in atherosclerotic plaque formation and progression. Macrophages, critical effectors of inflammation and innate immunity, are key pathogenic drivers of vascular disease,” Barrett wrote.