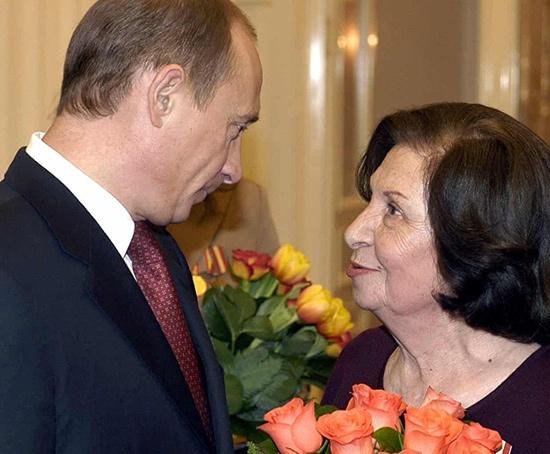 The Russian president, Vladimir Putin, congratulates Goar Vartanian in Moscow in 2005. He said of her and her husband: ‘They are modest people, they don’t like to be called heroes.’ Photograph: Itar-Tass/AP

An Armenian woman who became a Soviet spy and helped foil a Nazi plot to assassinate Stalin, Churchill and Roosevelt in 1943 has died aged 93.

Goar Vartanian, who with her husband, Gevork, worked as a secret agent on numerous missions, died on Monday. She will be buried in Moscow’s prestigious Troyekurovskoe cemetery, said Sergei Ivanov, a spokesman for Russia’s SVR intelligence service.

Vartanian helped thwart Operation Long Jump – a Nazi plot to assassinate the allied leaders at their first meeting in Tehran in November 1943.

Born on 25 January 1926 in Gyumri, in what was then Soviet Armenia, she moved with her family to Iran in the early 1930s. She joined an anti-fascist group at the age of 16 and worked with Gevork to expose German agents.

When Hitler ordered the plot to kill the “Big Three” at a conference in Tehran, their group reportedly followed Nazi agents and exposed the plan.

The couple moved to the Soviet Union in 1951 and had a long career as secret agents. The SVR – one of the successor agencies to the Soviet-era KGB – said they were involved in active intelligence work in “extreme conditions in many countries” but did not provide further details.

Gevork, who was decorated with the Hero of the Soviet Union award, died in 2012 aged 87. “Gevork used to say that of the five rays of his Hero Star, at least two belonged to his beloved Goar,” Ivanov said.

In June 2017, Vladimir Putin – himself a former KGB agent – visited SVR headquarters and praised secret agents including the Vartanians. “They are modest people, they don’t like to be called heroes,” said the Russian president.

Goar retired in 1986 but continued to train young agents.

The former Soviet spy Mikhail Lyubimov said he doubted that Russia would reveal further details of the couple’s operations “so as not to cause political scandals in the countries they worked”.