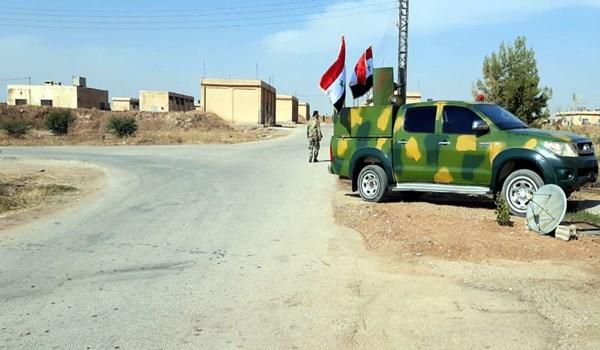 TEHRAN (FNA)- The Syrian Army troops continued their advances in the Southern countryside of Idlib, and regained full control of another strategic town there.

The Syrian state news agency SANA reported that the Syrian Army has recently gained new achievements in its battle with the Takfiris in Southern Idlib, and took full control of al-Seir strategic town.

In a relevant development on Monday, the Syrian Army managed to take control of the key towns of Um al-Khalakhil and al-Zarzour in Southern Idlib.

The Arabic-language website of Sputnik news agency reported that the Syrian Army continued its military operations against the Tahrir al-Sham al-Hayat (the Levant Liberation Board or the Al-Nusra Front) and Ajnad al-Qoqaz in Southeastern Idlib province.

The source said that the Syrian Army managed to block the Al-Nusra Front’s supply routes towards Um al-Khalakhil and imposed full control over the town.

It noted that over 50 terrorists were killed and wounded in clashes, and a major part of their military grid was also destroyed.

On November 14, the Syrian Army kicked off the second phase of its military operations in Southeastern Idlib from air and by using artillery attacks.

Al-Nusra Front has regained control over 70 percent of Idlib province as well as the Western and Northwestern regions of Aleppo.

People in Idlib have staged several protest rallies against terrorists, specially Tahrir al-Sham, in the past few months, calling for the withdrawal of terrorists from the occupied territories.