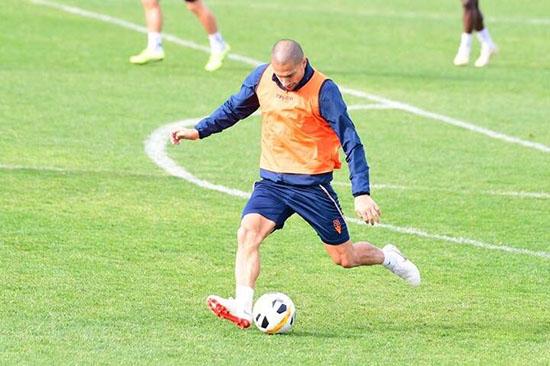 Başakşehir has climbed to the top of Group J in the Europa League and tonight faces AS Roma, which was 4-0 winner against the Turkish Süper Lig club in group opener.

The two other Turkish clubs in the competition, Beşiktaş and Trabzonspor, have no chances of advancing and both teams are expected to rest their stars on the European stage.

Beşiktaş takes on Slovan Bratislava and Trabzonspor plays Getafe, both at home.

Back-to-back victories over Wolfsberg have lifted Başakşehir to the top of group, and the Turkish side will be through to the knockout phase of a UEFA competition for the first time if i can extend that sequence at home to Roma, which is without a group win since it beat the Turkish side 4-0 at the Stadio Olimpico on Sept. 19.

Başakşehir has recovered well from that initial setback, drawing 1-1 at home to Borussia Mönchengladbach before doing the double over Austrian group stage first-timer Wolfsberg (1-0 at home and 3-0 in the away game) to go two points clear at the top of the table.

Roma drew 1-1 at Wolfsberg in its second group game before Mönchengladbach struck 95th-minute goals to earn an away draw and then a home win against the Giallorossi, compromising its qualifying chances in the process.

The Turkish club will go through with a win, which would end Roma’s interest if it were accompanied by a Mönchengladbach victory in Austria.

Also on Nov. 28, Unai Emery has the chance to relieve some of the pressure surrounding his position at Arsenal by securing qualification for the knockout rounds with a match to spare.

Speculation over Emery’s job has ramped up after his Gunners side were booed off at the end of their 2-2 draw with lowly Southampton at the Emirates Stadium on Nov. 23, gained only thanks to a 96th-minute leveler from Alexandre Lacazette.

However, he can remove some of the gloom hovering over North London by booking a place in the last 32 with a win over Eintracht Frankfurt.

Group F leader Arsenal is four points ahead of both third-placed Eintracht and Standard Liege with two matches remaining, and will also qualify if Standard does not win at bottom side Vitoria Guimaraes.

Emery was publicly backed by the Arsenal hierarchy at the start of the international break but the pressure has continued to grow following a run of just two wins in their last 11 Premier League games, with bookmakers in the United Kingdom placing him among the favorites to be the next manager ousted.

The Spaniard said he was “disappointed and frustrated” after the draw, which denied the Saints a first win at Arsenal since 1997.

“I understand the supporters, we didn’t deserve any more today, we lost a big opportunity to connect with our supporters,” he said.

“We had the chance to take confidence from today but we didn’t do that.”