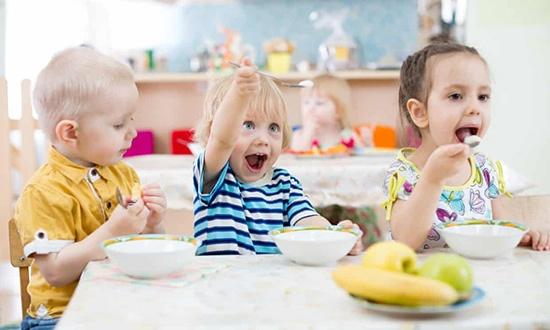 The latest plant-based story to cause outrage revolves around a vegan pre-school. But then these skirmishes aren’t really about the food, are they?

Innocent victims or brave pioneers of a meat-free future? That depends on which side you’re on. Photograph: Andrey_Kuzmin/Getty Images/iStockphoto

I was idly trying to put myself in the shoes of the angry parents, whose children have been forced to go vegan by the staff at Jigsaw Day Nurseries in Chester.

But then I realised I didn’t need to use any imagination: the cooking teacher at my kid’s primary school is vegan, and only a week ago, I was helping 10-year-olds make “sausage rolls” out of puy lentils and pearl barley. I was angry about a lot of things – children are incredibly annoying – but not the food. Veganism and its associated furores are not really about food; they are a culture war being fought on a tablecloth. When a vegan doesn’t make you angry, it doesn’t follow that you are neutral in the war: it just means your side is winning.

Last year, a chef told Facebook she had spiked a vegan’s pizza, and got death threats. A TV contrarian discovered the Greggs vegan sausage roll and had uncontainable rage. A professional posho quit Waitrose magazine for a joke about killing vegans. A MasterChef winner called a vegan a “dick”. It’s a trigger issue all right, but what is it triggering?

Whether the motive is animal welfare or environmentalism – and both are completely sound, by the way; the only way the rest of us can continue eating animal products is by rigorously ignoring how the end up on the plate – the implication is that vegans are improving society by denying themselves gratification. Because they are. This used to be called being “holier than thou” and is now called “virtue signalling” by people who think it’s cool to despise virtue.

Underpinning this is a fundamentally political divide: should we try to be the change we want to see in the world, and work collectively towards a brighter future? Or is that all just a pious pipedream, when the reality is that everyone is in it for him or herself? It’s everything: left v right; green v denier; idealist v cynic. At the same time, it’s nothing, because if the vegan can be shown to be a hypocrite or in some other way unlikable (have they sat on a leather seat? Are they shoving their quinoa down your throat?), then their lofty dream will evaporate like … like oat milk.

The rift between vegans and meat eaters is always intensely personal; after all, at the conceptual level, it doesn’t exist (what’s it to you, in theory, if another person cares too much about a cow to eat one?). As such, it is very engrossing because all character attacks are. And it is quintessentially 21st-century, because this century sucks.