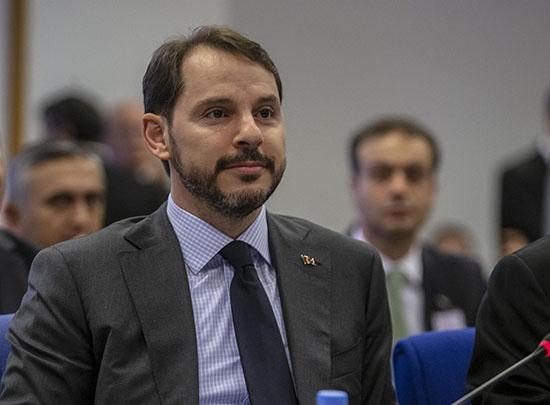 Turkey’s inflation will permanently come down to single digits with appropriate measures to be taken to meet this target, Treasury and Finance Minister Berat Albayrak has said.

Speaking at a parliamentary commission in Ankara, the minister noted that there was a decline this year in inflation and added, “We will bring down inflation to lower, single-digit figures with the monetary fiscal policy coordination and by implementing structural measures designed to boost competitiveness and productivity.”

According to the latest official data, the country’s annual consumer price inflation dropped to 8.55 percent in October from 9.26 percent in September.

In September last year, the annual inflation rate stood at a much higher 25.24 percent.

In its new economic program, released in September, the government forecasts that annual inflation will be 12 percent at the end of this year.

The government targets 8.5 percent and 6 percent inflation rates next year and in 2021. The program predicts that inflation will further ease to 4.9 percent in 2022.

Albayrak also said that the recovery in economic activity continued into the second half of the year, which followed a mild recovery in the first half, thanks to the improvement in financial conditions and the decline in inflation.

“Improvements in industrial production, capacity utilization rates and confidence indices as well as the acceleration in growth of loan volume support this [recovery] process,” he said, adding that exports and tourism continue to support economic activity.

According to the government’s projections in the September program, the Turkish economy will expand at 0.5 percent this year. The country’s economic growth will gain further momentum to reach 5 percent growth rates in the following three years, the government predicts.

Last week, the Organization for Economic Co-operation and Development (OECD) revised upwards its forecasts for the Turkish economy.

Consequently, the OECD upgraded its economic growth projection for 2019 to 0.3 percent, up from a contraction of 0.3 percent.

According to the OECD, the Turkish economy will grow by 3 percent – versus 1.6 percent growth in the previous forecast – next year and 3.2 percent in 2021.

The minister underlined that the government will continue with privatizations by utilizing new and alternative models including public offerings.