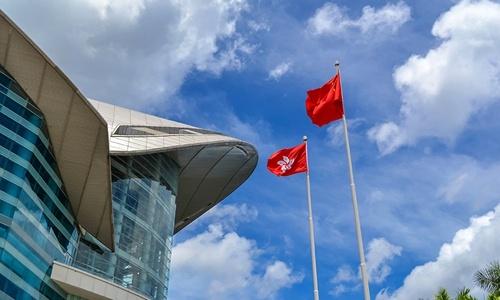 By Chen Qingqing in Hong Kong and Leng Shumei in Beijing Source:Global Times

Chinese Foreign Ministry voiced strong opposition to the signature of the Hong Kong Human Rights and Democracy Act by the US, which seriously interferes in the internal affairs of China and violates international laws and basic principles of foreign relations.

The White House on Wednesday signed the act, a move set to complicate the ongoing trade talks between China and the US as the US president is likely to selectively implement the act’s provisions by evaluating trade negotiations.

Such an act is abominable in nature and reveals vicious intentions of the US to sabotage the stability and prosperity of HK and disrupt the progress in China’s national rejuvenation, the Foreign Ministry said in a statement issued on Thursday.

US President Donald Trump announced he had signed the act into legislation on Wednesday, according to a statement.

Chinese analysts who closely observe the Hong Kong situation told the Global Times that “the signature of the act is not out of our expectations,” as the US would “swim with the current” while adding more legal tools to contain China.

The bill was passed in both chambers of Congress, showing that the hawkish political power in Washington is strong, Tian Feilong, associate professor at Beihang University in Beijing, told the Global Times.

“Trump lacks the political power to veto the bill, while it’s believed that a veto is unnecessary. The signature is within expectations,” he said.

However, the US president may selectively implement provisions of the act as leverage for ongoing trade negotiations, but he may also hold sanctions that are unfavorable for the talks, the analyst noted.

By emphasizing that the US president reserves the right to exercise this legislature, it is implied that Trump is dissatisfied with politicians in Congress who interfere with his own foreign affairs authority, “and he pledged to reserve the right to make further moves in accordance with the law,” Li Xiaobing, an expert on Hong Kong, Macao and Taiwan studies at Nankai University in Tianjin, told the Global Times on Thursday.

The Hong Kong Special Administrative Region (SAR) government said it strongly opposes the signature of the bill, which meddles in China’s internal affairs, according to a statement issued on Thursday morning. The bill is unnecessary and groundless, and will damage exchanges between the region and the US, the statement showed.

The US is adding weight to its attempt to fully contain China by signing the bill. It means that the US would officially interfere into Hong Kong affairs, which China does not want to see, Fan Peng, a research fellow at the Chinese Academy of Social Sciences’ Institute of Political Sciences, told the Global Times on Thursday.

The US intends to use Hong Kong as a political card, just like Xinjiang, to force China to sign extremely unfair agreements in the trade negotiations. By doing so the US can interfere in China’s domestic affairs from all sides, including its judicial system, Fan said, noting that the US will by no means succeed.