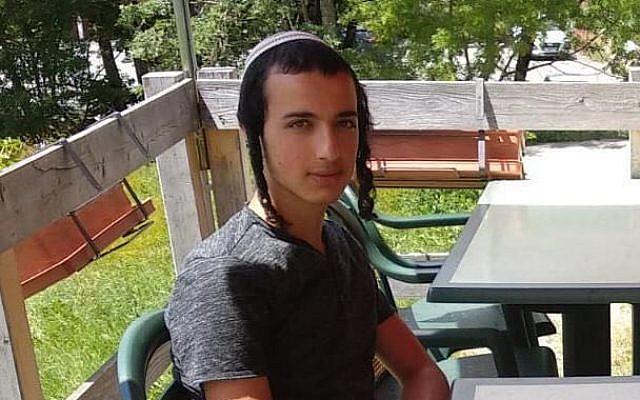 Dvir Sorek, 18, a yeshiva student and off-duty IDF soldier who was found stabbed to death outside a West Bank settlement on August 8, 2019 (Courtesy)

Israeli forces raided a southern West Bank town early Thursday and razed the homes of Palestinian men accused of murdering an off duty Israeli soldier in an August attack, the Israel Defense Forces confirmed in a statement.

The IDF said it demolished the homes of four suspects.

Cousins Nasir Asafra, 24, and Qassem Asafra, 30, were arrested in August and later charged in the stabbing death of Dvir Sorek, 18, as he made his way to the West Bank religious seminary where he studied as part of a program combining military service with Jewish study.

Three others were also indicted on terror charges in connection with the murder.

The IDF said there were clashes Thursday morning between troops and locals who protested the action, and rocks and tires were thrown at soldiers.

Pictures and video published in Palestinian media showed a digger being used to raze a structure in the town, and armed troops guarding heavy equipment.

Israel says the practice of demolishing terrorists’ homes is an effective means of discouraging future attacks, though it has been criticized by human rights groups as a form of collective punishment and by some analysts as an ineffective deterrent measure.

Defense Minister Naftali Bennett responded to the announcement of the home demolitions, saying that those who carry out terror attacks will be punished.

“Unfortunately, we cannot guarantee that there will be no more terror, but we must exact a heavy price from anyone who raises a hand against an Israeli citizen,” he said.

According to an indictment filed in October, Nasir Asafra and Qassem Asafra hatched a plan to kidnap and kill a settler. When they spotted Sorek, who was getting off a bus near Migdal Oz in the Etzion settlement bloc south of Jerusalem, they approached him in a car and stabbed him to death.

Qassem is believed to have driven the vehicle while Nasir stabbed Sorek to death.

Sorek’s body was found the next morning. The two were captured in Beit Kahil after a two-day manhunt.

Besides the two cousins, three others were indicted for helping plan and prepare for the attack.

Qassem’s wife Inas was also charged with assisting the group beforehand and after the deadly stabbing attack. The group was accused of carrying out the attack on behalf of the Hamas terror group.

The IDF had informed the families of four of the cell members that it planned to demolish their homes, and the families filed petitions with the High Court in an attempt to stop the razings.

Judah Ari Gross and Jacob Magid contributed to this report.