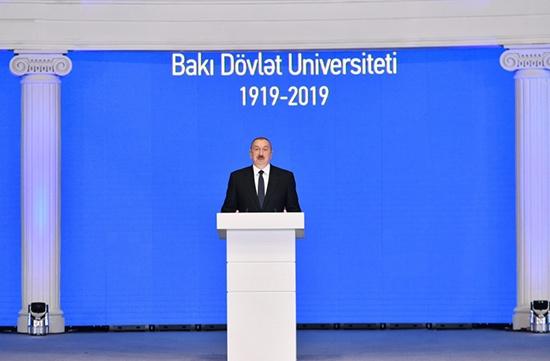 Baku / 28.11.19 / Turan: Some countries and foreign circles seek to rule Azerbaijan, which they did in the early 90’s, but now it is already impossible. This statement was made by President Ilham Aliyev, speaking on November 26 at an event to mark the 100th anniversary of Baku State University.

“Today, sometimes we hear from some external circles that, they say, we want to help Azerbaijan, we want to see Azerbaijan as a developed country. All this is a lie. I say this absolutely sincerely,” he said, saying that some influential countries have long tried to block the election of Azerbaijan to the UN Security Council, demanding that Baku withdraw its candidacy.

He again accused the government of the Popular Front of stealing national wealth. “At a time when the treasury was empty, we applied for loans, but no one gave them to us. Well, if you love Azerbaijan so much, then why didn’t you help us at that time?” Aliyev said, referring to international organizations.

“Therefore, when someone says that he wants Azerbaijan to be prosperous, do not believe that. Let the youth not believe that,” he continued, without explaining who he means.

Continuing criticism of external forces, Aliyev attacked Western countries. “The cradles of democracy contain Muslim migrants in their cells. “Stop Islam,” they say. They say they can accept migrants (I mean European countries) but not Muslim migrants.”

He rejected criticism of the West about violations of rights and democracy in Azerbaijan. “No matter how hard they try, no matter how many lies and slander they spread, all this does not bother us, because the people support us, as evidenced by recent polls. Most of the population does not see an alternative for us, and who can become such an alternative?” Aliyev said.

Then he decided to share “operational data” that foreign circles openly say that there is no traditional opposition in Azerbaijan, as there are separate corrupt groups. Therefore, monetary support was reduced.

Now foreign circles have targeted young people to “confuse them, poison their minds, and raise them against the nation.” Therefore, Aliyev called on educators to properly teach youth.

He again criticized the West for plans to organize color revolutions in 2003 and 2005. “Azerbaijan has already been indicated as the next place in the series of those revolutions. T-shirts with the inscription “Georgia, Ukraine, Kyrgyzstan, Azerbaijan” were produced. That is, we were to become the fourth, with others after us. Now the whole world sees that these revolutions brought those countries only misfortune,” Aliyev said.

He did not forget to criticize the Muslim countries, which “embrace with Armenia.”

“Can’t you see that they have demolished our mosques to the ground? After all, these mosques belong not only to us, but to the entire Muslim world. How can you close your eyes to this? How can one be so hypocritical?” Aliyev said.

In conclusion, he again criticized the West, where men and women are not identified from each other, and called for the preservation of “traditional values.” “See what happens in a number of countries. When you see this, you are horrified. And then they tell us, come and integrate with us. Where to integrate? With those that say “Stop Islam”? With those where there is no difference between a man and a woman? We will not integrate with them!” Aliyev said.