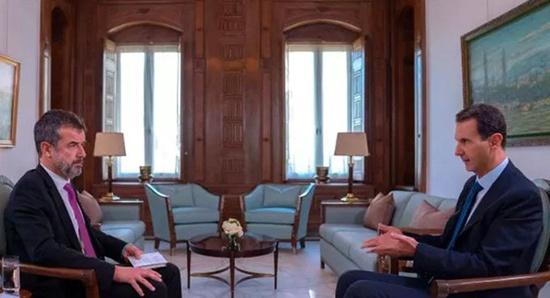 www.almasdarnews.com-BEIRUT, LEBANON (4:00 P.M.) – Syrian President Bashar Al-Assad sat down for an interview with the Paris Match newspaper this week to discuss a number of topics, including the future of the Islamic State (ISIS/ISIL/IS/Daesh) fighters in Syria.

While the interview itself will appear on Thursday at 7:00 P.M. (local time), a brief excerpt was released by Syrian state TV today.

In the excerpt, the interviewer asks President Assad what will happen to the Islamic State fighters in the prisons belonging to the Syrian Democratic Forces (SDF), for which he responded: “every terrorist in the areas controlled by the Syrian state will be subject to Syrian law, and Syrian law is clear concerning terrorism. We have courts specialized to deal with terrorism and they will be prosecuted.”

The Syrian government currently does not have administrative control over the SDF prisons, but with the recent agreements between the latter and Syrian military, these ISIS fighters will likely be transferred to the state authorities for trial.

Several foreign Islamic State fighters are currently detained in these prisons and they have not been expatriated, despite the U.S.’ calls for allied nations to take back these militants.

It is not clear what Washington will do in the event that these ISIS fighters are transferred to the Syrian authorities, as the U.S. and Syria have no diplomatic relations.