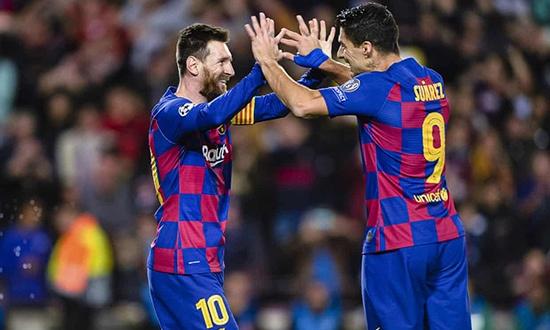 Lionel Messi scored in his 700th match for Barcelona and also set up goals for Luis Suárez and Antoine Griezmann as the Catalan side beat Borussia Dortmund 3-1 to seal a spot in the Champions League knockout stages as Group F winners.

Suárez put Barça in front at a packed and rocking Camp Nou in the 29th minute after having an earlier effort ruled out for offside before the Uruguayan set up Messi on his landmark night four minutes later.

Griezmann finished off a pass from Messi to further stretch Barça’s lead in the 67th minute and get a much-needed goal for his confidence after failing to score in his previous six appearances for the club.

Dortmund’s Jadon Sancho scored an impressive consolation goal for the German club in the 77th minute and then forced the Barca keeper Marc-André ter Stegen to turn a shot on to the crossbar.

But the visitors’ strong finish could not tarnish a welcome win for Barça, who had come in for scathing criticism for their recent poor displays against Leganes and Slavia Prague.

Lautaro Martinez notched a double and Romelu Lukaku also found the net as Internazionale ran out 3-1 winners at Slavia Prague to move level with Dortmund on seven points.

Ernesto Valverde’s side top the group with 11 points from five games, Inter are second on seven while Dortmund are third, also on seven, with Slavia bottom with two.

Salzburg thumped Genk 4-1 away to keep their hopes of reaching the knockout stage alive in the home decider against holders Liverpool, who need to avoid defeat.

Two goals in as many minutes just before half-time laid the platform as third-placed Salzburg moved on to seven points in Group E, three behind leaders Liverpool and needing to beat Jürgen Klopp’s team in Austria on 10 December to advance.

Salzburg, who lost 4-3 to Liverpool earlier in the group stage, would need only a low-scoring single-goal victory to finish ahead of Liverpool.

Ajax top Group H on 10 points, two points clear of Valencia and Chelsea, after a 2-0 win at Lille – who were already eliminated. Hakim Ziyech and Quincy Promes were on target for the Dutch side.

Emil Forsberg struck twice late in the game to earn RB Leipzig a 2-2 draw against Benfica that saw the Bundesliga side advance to the knockout stages. Artem Dzyuba and Magomed Ozdoev gave Zenit St Petersburg a 2-0 win over Lyon.

Zenit and Lyon are tied on seven points, three clear of Benfica who sit at the bottom on the table.