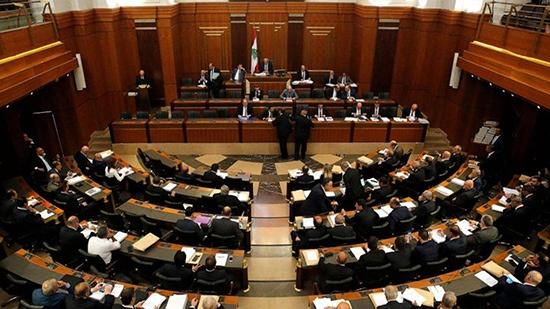 Lebanese lawmakers and ministers meet at the parliament building during the opening session of the draft 2019 state budget, in Beirut, Lebanon, Tuesday, July 16, 2019 (AP)

BEIRUT: Sources have confirmed that parliamentary consultations, initially set for Thursday, have been postponed indefinitely citing the absence of a number of MPs.

A mere 24 hours later, officials backtracked on that notice, with sources telling Annahar that discussions with Hariri are still ongoing to secure his backing for another candidate at the very least.

Hariri had signaled his unwillingness to head a government made up of both specialists and politicians, arguing that a “fully independent Cabinet is the only way out of the sharp economic crisis facing Lebanon.”

The announcement had offered a sign of relief for protestors, who have been demanding the formation of a new government since Hariri submitted his resignation a month ago.

However, dozens of people were injured in overnight confrontations between supporters and opponents of the country’s president, according to the Lebanese Red Cross. Fistfights and stone-throwing erupted in a northern city and a mountainous town.

Lebanon’s massive nationwide protests against the country’s ruling elite remained overwhelmingly peaceful since they began last month. But as the political deadlock for forming a new government drags on, tempers are rising.

The protests have slid into violence in recent days. That’s particularly after supporters of the main two Shiite groups attacked protesters in Beirut Sunday night.

On Tuesday night, Aoun’s supporters and opponents clashed in the city of Tripoli and in the mountain town of Bikfaya injuring 34.

In the midst of the political deadlock and financial uncertainty, Lebanon’s Economic Bodies group called for a general strike and the complete closure of all private institutions across the country from Thursday to Saturday to push major political parties to form a new government and avert further economic damage.

“The political forces have not assumed their national responsibilities and have not shown the seriousness necessary to produce solutions to the current crisis,” it said.

Lebanon has been dealt a hard blow to its foreign currency liquidity, prompting banks to assume a more conservative approach to preserve its reserves. Lines of credit have been slashed while withdrawals have been limited across the board, giving rise to black market rates which had surged to near the 2000 LBP to the dollar mark, about a third higher than the pegged rate of 1,507.5.

Banks’ informal capital controls have yet to be ratified into law by Parliament, with a political consensus on the issue still lacking. Central Bank Governor Riad Salameh has maintained on a number of occasions that capital controls are off the table while assuring that haircuts on deposits remain far fetched.