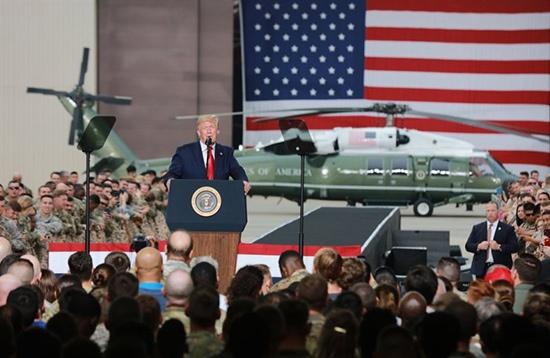 The Korea Times – The U.S. Defense Department has estimated it will cost nearly US$4.5 billion to station troops in South Korea in fiscal year 2020, suggesting why President Donald Trump reportedly seeks $5 billion from Seoul next year.

According to the Pentagon’s budget estimate drawn up in March, the total payment toward military personnel, operations, maintenance and family housing in South Korea amounts to $4.46 billion in the fiscal year ending on Sept. 30, 2020.

Trump may have had those figures in mind when he balked at the scope of the U.S. defense commitment to South Korea in an interview in January with author and former presidential adviser Doug Wead.

In his new book, “Inside Trump’s White House: The Real Story of His Presidency,” published Tuesday, Wead said the president asked him if he knew how much the U.S. was spending to “defend” South Korea.

“Four and half billion dollars a year,” Trump told Wead. “Figure that one out?”

The comment serves as a reminder that Trump believes South Korea should pay more for the stationing of 28,500 U.S. troops in the country, an issue that has emerged as a key challenge facing the decades-old alliance.

During his bombastic presidential campaign, Trump labeled South Korea as a “free rider” on America’s security network. He even called the Asian ally a “major abuser,” according to a recently published memoir by Guy Snodgrass, former chief speechwriter for former U.S. Defense Secretary James Mattis.

His perceptions have prompted criticism that Trump cares more about pecuniary advantages in the U.S.’ alliance management than the strategic benefits of promoting shared values with the allies that have undergirded America’s post-war global leadership.

Observers argue that South Korea has already shown its commitments to the evolving alliance through various contributions ― or sacrifices ― including its troop dispatch to the Vietnam War during the Cold War and America’s war on terrorism in the 2000s.

When it comes to financial contributions for the U.S. Forces Korea (USFK), Seoul has been providing indirect yet significant support such as its provision of more than 3,000 Army soldiers as augmentation troops to the U.S. Army and exemptions or cuts in utility fees and costs for the U.S. military using ports, airports, roads and railways.

But the Trump administration has reportedly demanded a more than fivefold increase to $5 billion in Seoul’s contributions to the upkeep of USFK in negotiations over the cost-sharing deal, or Special Measures Agreement (SMA).

Washington’s demand has triggered concerns from within the U.S. as well.

In a recent interview with the Voice of America, John Hamre, president of the Center for Strategic and International Studies, said that U.S. forces in Korea are not “mercenaries,” while stressing the importance of protecting an ally that shares common values.

This year’s SMA, set to expire at the end of this year, does not require Seoul to pay toward the categories included in the Pentagon’s budget estimate.

The SMA requires Seoul to pay only for Korean civilians hired by the USFK, the construction of military facilities to maintain the allies’ readiness and other forms of support.