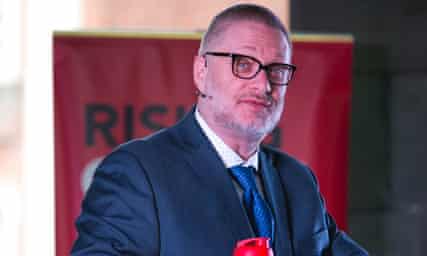 Michael Latz, based in Minneapolis, urged people of faith to ‘be moral leaders’ and delivered a message of radical religion at global peace forum Rising 19

‘We have to put pressure on elected officials, show up at town hall meetings, educate communities on what the key issues are and how they impact people,’ said Latz. Photograph: Courtesy Advent Communications

Faith leaders must mobilise their communities to fight for economic and social justice by lobbying for policies based on fairness and taking part in rallies, marches and protests, a senior rabbi from Minnesota has said.

Michael Latz, who delivered a message of radical religion to Rising 19, a global peace forum at Coventry cathedral in the UK attended by 250 people earlier this month, told the Guardian: “We have to mobilise people of faith.

“We have to put pressure on elected officials, show up at town hall meetings, educate communities on what the key issues are and how they impact people, be present at rallies and marches and protests, and be moral leaders in our communities around issues of equity, justice and fairness.”

“If people of faith are going to their churches or mosques or synagogues as though it’s some sort of spiritual jacuzzi, it’s a denial of the very heart of religion. Religion is about morality and it’s about public morality. It’s about how we treat our neighbours but its purpose is also to ask why people are not able to buy food or pay their rent or pay for healthcare. That is a moral question.”

The issues of greatest urgency in the US were immigration, the “horrific epidemic of gun violence”, the rise of white nationalism, climate justice and “absolutely unnecessary” poverty, Latz said.

On immigration, he said: “We as Jews have a special obligation to welcome the stranger into our homes. We know what it’s like to have no home, to have to flee – we know that story in our bones, it’s in our DNA.

“This is quite simple: are the people seeking a better life at our southern border human beings or not? And if they are human beings, they deserve to be treated as such. This issue is black and white as far as I’m concerned. If you’re not for moral, humane, comprehensive immigration reform, you are tacitly supporting ripping babies from their parents’ arms at our border.”

A network of more than 80 synagogues in the US has offered sanctuary to undocumented migrants.

“We have people living in basements and attics,” Latz said. “It’s not easy, but it’s vital and important holy work, and we are called to do it.”

In Minnesota, faith organisations lobbied for legislation to prevent schools from expelling or suspending children under 12 for nonviolent offences.

“It may not sound much,” Latz said, “but the vast majority of kids who were suspended were children of colour, and there is a direct correlation between being suspended at the age of 10 and landing in prison. So by changing the policy we are stopping the school-to-prison pipeline.”

He added: “The next level we’re working on – which is much harder – is changing the tax codes in the state, so people who make more contribute more.”

Tax reforms instituted by “our dreadful miscreant of a president” have given “horrific tax breaks to people who are obscenely wealthy already”, Latz said.

In the present political climate, he added, “we are acutely aware of how fragile our structures of democracy are, of how technology can be used to undermine democracy. The lines being drawn in society are so bright.”

Latz rejected the viewpoint that faith leaders should stay out of politics, saying being political was not the same as being partisan. Political engagement could also re-energise religious institutions, he said.

“There are [religious leaders] whose first commandment is ‘Thou shalt not offend.’ Then they wonder why young people don’t come to shul [synagogue]. Synagogues that are thriving have a very clear engagement with justice issues. I have young people by the hordes coming to my shul because we’re offering serious study, we’re wrestling with deep issues and we’re asking big questions.

“When you go to shul, you should have your heart cracked open, you should be weeping, your hands should be shaking – and you should walk out energised and ready to get to work. If not, why go? Go watch a movie or get a mani-pedi instead.”

Latz, 49, who has two children with his husband, said being a gay rabbi was “not so unusual” these days.

“My commitment to justice comes out of being a gay man and a Jew. Feminism taught us that the personal is political. My own experience of facing homophobic discrimination, and having to work hard to marry my husband and protect my family, has shaped for me how vital and important this work is.”

Nevertheless, faith-based political activism could be “risky and problematic”, he said. “This is not for the faint of heart. You lose 27 times before you win.”

But increasing numbers of faith leaders were engaging in the struggle for justice, he said. More than 2,000 rabbis, for example, have joined T’ruah, a network dedicated to advancing human rights in North America, Israel and the occupied Palestinian territories.

“My children and future grandchildren will ask me what I was doing in this moment of great moral crisis,” Latz said. “Every generation faces a moment of moral conscience and it has to decide what side of history it will fall on. We have one life to live, and we have the power to make the world more whole.”