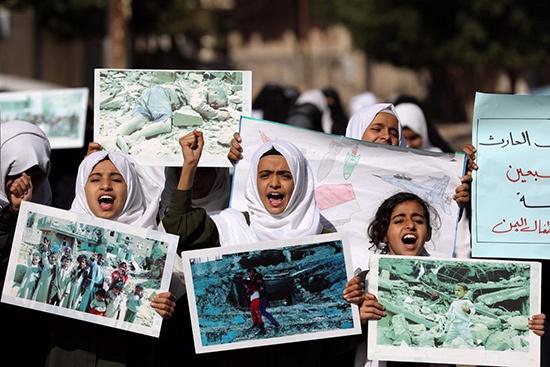 US legislators are hoping amendments to US defence spending bill will end support for Saudi-led coalition in Yemen.

Democratic legislators in the United States are renewing efforts to end American support for the Saudi-led coalition’s war in Yemen, in a push that may “ground the Saudi force to a halt”.

Earlier this year, President Donald Trump vetoed a bipartisan congressional resolution to suspend US assistance to Saudi Arabia’s war efforts in Yemen – a conflict that has killed thousands and led to a humanitarian crisis.

This week, members of Congress began to rally support for amendments to the annual defence budget that may help put an end to US involvement in the conflict.

The amendments would bar the sale of air-to-ground missiles to Saudi Arabia and “prohibit support to and participation in the Saudi-led coalition’s military operations against the Houthis in Yemen”.

“In effect, these amendments would ground the Saudi force to a halt,” Congressman Ro Khanna, an outspoken opponent of the war, said in a video released on Wednesday.

“They would not be able to bomb Yemen,” said Khanna, who added that progressive Democrats would not back a defence budget bill – known as the National Defense Authorization Act (NDAA) – that does not include the anti-war measures.

The amendments, which were brought forward by Democrats Adam Smith and Tom Malinowski, passed in the US House of Representatives in July.

They also received a boost on Wednesday from Chuck Schumer, the top Democrat in the US Senate and a member of the party’s centrist old guard.

“The final defense bill should include the provisions on ending the war in Yemen—including the Malinowski & Smith amendments,” Schumer tweeted.

The Senate has approved its own version of the act without the amendments.

Now the leaders of the armed services committees in the two chambers are negotiating to put forward a unified bill that would have to pass both the House and the Senate before making it to the president’s desk.

The talks are being led by Adam Smith, who chairs the House Armed Services Committee; his counterpart in the Senate, Republican James Inhofe, as well as the ranking members – top legislators from the minority parties – on the committees in both chambers.

Jack Reed, the ranking Democrat on the Senate Committee on Armed Services, said he supports the amendments.

‘Congress has got to stand up for the Constitution and tell this lawless president: We are not giving you a Pentagon bill that allows you to partner with the despotic Saudi regime in its horrific war in Yemen’

“I am working with Chairman Smith to enact them,” he told MEE in an email.

“Congress has got to stand up for the Constitution and tell this lawless president: We are not giving you a Pentagon bill that allows you to partner with the despotic Saudi regime in its horrific war in Yemen,” he wrote on Twitter on Wednesday.

Saudi Arabia and the United Arab Emirates have led a bombing campaign against Yemen’s Houthi rebels since March 2015.

Riyadh and Abu Dhabi accuse Yemeni rebels of being Iranian proxies, but Tehran denies providing military support to the Houthis.

The conflict has killed tens of thousands of people, brought Yemen to the verge of famine and caused outbreaks of cholera and other preventable diseases in what the United Nations has called the biggest humanitarian crisis in the world.

Sanders, who was one of the original sponsors of the bill that was blocked by Trump, said the president’s veto did not quash efforts to end US support for Saudi Arabia.

“This is how we are going to stop this unconstitutional war,” he said, referring to the NDAA push.

Serving as a so-called must-pass bill, the NDAA allows political parties annually to attach broader policy issues to it.

This year, Democrats in the House have also inserted an amendment led by Khanna that would “prohibit unauthorised military force in or against Iran”.

Another measure attached to the bill also calls for limiting the scope of the Authorization for Use of Military Force (AUMF), a law passed in 2001 after the 9/11 attacks to allow then-President George W Bush to go after al-Qaeda operatives worldwide.

Ilhan Omar, a Democratic congresswoman from Minnesota, said she would not back a defence bill that does not have both the Yemen and AUMF provisions. She also voiced concern about the growing military budget.

“Progressives should not be voting for a NDAA bill that funds wasteful Pentagon spending at this level, period,” Omar told MEE in an email.

“And we certainly should not be voting for a bill that commits the US to endless involvement in the Saudi-led war in Yemen – or continues funding for endless war under the 2001 AUMF. I oppose any NDAA bill that doesn’t end both.”