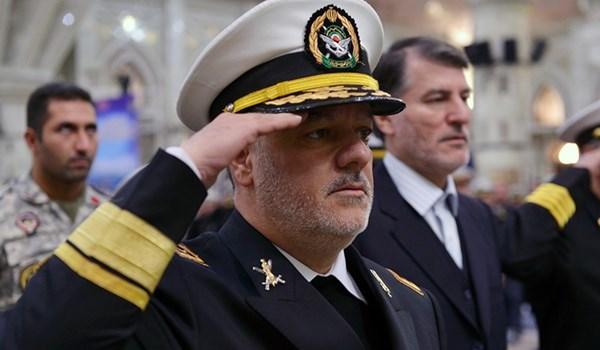 TEHRAN (FNA)- Iranian Navy Commander Rear Admiral Hossein Khanzadi announced that his forces will be equipped with long-range drones in the near future.

“As regards drones, we will observe addition of long-range aircraft with very high flight ceiling whose level of (remote) guidance is special,” Khanzadi said, addressing a ceremony in Tehran province on Thursday.

He added that the Navy is now equipped with drones which can be guided 200km away, adding that the new drones will remove the limit on the range.

Rear Admiral Khanzadi had also announced on Wednesday that his forces would be equipped with a new home-made destroyer, named ‘Dena’, within the next two months.

“God willing, we will witness addition of the destroyer, Dena, to the Navy in (the Iranian month of) Bahman (January 21 to 19 February),” Rear Admiral Khanzadi told reporters in a press conference held in Tehran to mark the national Navy Day (November 28).

He also noted that Sahand, another destroyer which joined the Navy last year, is now ready for missions in the ocean, and further expressed the hope that Taftan warship would be delivered to the Naval forces next year.

“Concurrently, we will witness the launch of a mine-clearing warship, Saba, in the Navy as well as a drone, namely Simorq, which has a flight durability of 24 hours and capability to carry different types of weapons, including bombs, rockets and projectiles.”

Elsewhere, Rear Admiral Khanzadi also revealed plans to manufacture a new class of heavy destroyers, under a project dubbed Negin, which would each weigh over 5,000 tons in a bid to bolster the country’s defense might in the naval missions.