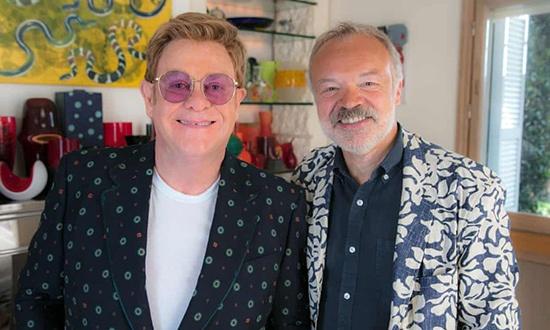 The crazy costumes, the incontinence pants, the dead squirrel on his head … Elton told all in this fawn-fest on the Côte d’Azur. But who paid for Graham Norton’s open-top Rolls-Royce?

The doves weren’t feeling it that night. Why should they have been? See it from their perspective. You and your mates have been trapped inside five pianos on stage at the Hollywood Bowl, waiting for your cue. And what was that cue? As soon as the flamboyant Englishman descends a staircase on to the stage, the piano lids will fly open, each bearing one of the letters of the name ELTON, hopefully in the right order. Your task will be to fly into the California night to a soundtrack of oohs and aahs before laughing boy bangs out Elderberry Wine.

It didn’t happen. As Elton John made his entrance into US society in 1973, in a white outfit making him look like the victim of a tarring and feathering, the piano lids flew up, but the birds didn’t. “The doves had fallen asleep,” he recalled. Like so many matters raised in Elton John: Uncensored (BBC One), questions remain. Were any doves harmed during the making of this concert? Had they nodded off during the sound check? I would have.

“It was the real start of my flamboyant outfits,” said Elton of the night that broke him stateside. Chubby, balding Reg Dwight from Pinner was, by his own charming admission, no Mick Jagger, David Bowie or Marc Bolan. Plus, stuck behind a piano, he couldn’t strut his stuff. He needed a right old zhooshing. Hence the Mozart wig he wore in Australia, the Donald Duck outfit in New York, although possibly not the spotted romper suit he chose for this sit-down with Graham Norton.

I have never really cared for Elton’s music, although I did warm to him during this hour-long interview about his six-decade career. It wasn’t just because he was out and proud in the homophobic 1970s, but also because his self-satire cut through the treacle of Norton’s kneel-down-and-derriere-smooch interview technique. How rare to encounter a 72-year-old man laughing at himself rather than onanistically buffing his legacy.

Why the toupee? “I don’t like being bald. I look like Shrek.” (Note to non-balds: baldness doesn’t necessarily make you green.) And he endearingly disagreed with critics of his disastrous 80s rug rethink. “They said it looked like a dead squirrel. More like a dead mole.”

He even told of playing a Vegas gig in 2017 only two weeks after a prostate cancer operation. When he took his parting bows, he was in excruciating pain from fluid under his colon (and wearing a nappy). “If only they knew,” he said, “at that moment I was pissing myself.”

So little of the original Elton remains. Hair, tonsils, prostate, appendix have all gone, but he has a pacemaker. “I’m like the bionic woman,” he giggled. Not quite: Lindsay Wagner had superpowers and her own hair.

Norton drove to the interview along the Côte d’Azur in an open-top Rolls-Royce. Were licence-fee payers bankrolling its rental? Or was it Elton’s, like the private jet he loaned Meghan and Harry? It was the second time this month the BBC was interviewing British royalty. Norton is no Emily Maitlis, although they had two things in common. Both interviewed their subjects on home turf; she in Buckingham Palace, he in Elton and David’s place in Nice. Both outdressed their interviewees – she in fabulous shoes and cod-military coat, he in a jaunty print jacket and matching shirt.

Coming after Prince Andrew’s inquisition, it was impossible not to compare the interviewers’ techniques. Maitlis was forensic, Norton oleaginous. “His showmanship and unique sense of style fast became legendary – and all before the age of 25,” oiled Norton. True, Elton has not been accused of having sex with a trafficked 17-year-old victim of a dead sex offender, but, still, one does hope for a nod towards journalistic critical distance from the BBC. Norton didn’t quite ask: “Remind us Elton, why are you so great?”, but the possibility was never remote. Worst, Norton thwarted Elton from describing his coming-out phone call to his mum, instead inviting him to compare his stage outfits to Liberace’s – about which I couldn’t care less.

That said, I was delighted to learn how Elton Hercules John, as Reg became in 1967, chose his middle name. It was after rag-and-bone man Steptoe’s longsuffering horse rather than the lavishly muscled ancient Greek hero – though the latter, I suspect, has the bigger following in the gay community.

Will he ever retire into domestic felicity with his husband and adopted sons? Not soon. If Paul McCartney can announce he is headlining Glastonbury aged 78, it’s unlikely his fellow septuagenarian is quite done. Elton is planning a musical of The Devil Wears Prada. His current so-called farewell world tour may never end. Lots of bits of Elton John have fallen off, but he is still standing.