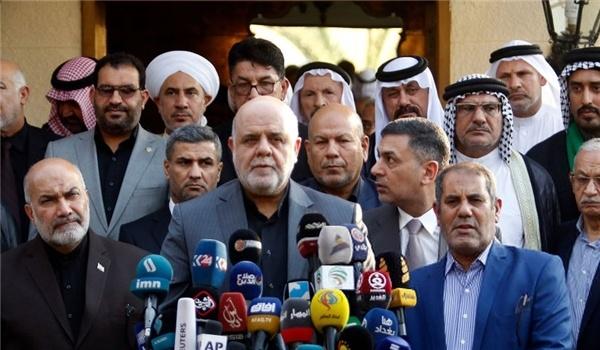 TEHRAN (FNA)- Iranian Ambassador to Iraq Iraj Masjedi said that the strikers at the country’s consulate in Najaf planned to destroy relations between Tehran and Baghdad, stressing that the two nations’ bonds are too strong to be undermined by such moves.

“Last night, a number of hooligans attacked Iran’s mission in Najaf and after confronting with security forces and harming some of them, entered the consulate and set the place on fire,” Masjedi said on Thursday.

“All our diplomats are now sound and safe,” he said, adding that however “heavy damages have been inflicted on the consulate building and it cannot be used anymore”.

“The purpose of those behind this incident is to destroy relations between Iran and Iraq,” Masjedi stressed.

“They are foreign mercenaries who are encouraged by TV channels of enemies; they seek nothing but to hamper brotherly relations between Iran and Iraq,” said the envoy, noting, “This is not what the Iraqi people and government want.”

Staff at the Iranian consulate were evacuated safely before the attack in the holy city. Local authorities imposed a curfew following the incident, state media reported.

According to local media, 47 Iraqi security staff have been injured during the attack. The Saudi-led media Al-Arabiya, activities of which is illegal in Iraq, has broadcast the attack in a live report from its beginning which raises the probability of a pre-planned attack.

A total of 100 demonstrators were injured during the clashes between security forces and demonstrators near the Iranian consulate in Najaf.

The Iranian foreign ministry condemned the Wednesday attack against the country’s consulate in the holy city of Najaf, stressing the need for the Iraqi government to protect the diplomatic missions and punish the rioters.

Foreign Ministry Spokesman Seyed Abbas Mousavi reminded the Iraqi government that it is in charge of providing security of diplomatic sites in that country, adding that Iran has conveyed its protest at the incident to Baghdad via the Iraqi ambassador to Tehran.