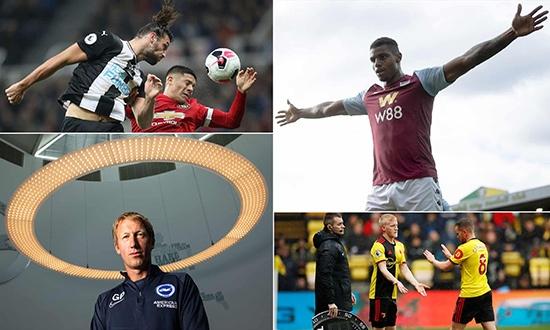 Flawed City defence meets hapless Newcastle attack, Leicester can end Silva’s service and only a miracle can save Emery

Steve Bruce said Newcastle were too passive during Monday’s sorry defeat at Aston Villa. One thing he can actively do about that is drop Jonjo Shelvey, who was irrelevant in midfield at Villa Park. With Sean Longstaff available again after suspension, and Matty Longstaff in line for a return to the starting lineup, Shelvey should be parked on the bench. Bruce probably wishes he could also make changes up front to try to exploit City’s defensive flakiness. There is not often a good case for starting Andy Carroll but this time there are two: City’s fragility and Joelinton’s haplessness. At least Allan Saint-Maximin shows signs of menace, even if his finishing so far has been down there with that of the bewildering Miguel Almirón. Mind you, Gabriel Jesus has not been looking sharp recently for City. So even though injury deprives both clubs of their best centre-backs (Jamaal Lascelles and Aymeric Laporte respectively), this match has the potential to end in a ridiculous 0-0 if midfielders do not step up to score. PD

Manuel Pellegrini has spent the season vacillating between Fabián Balbuena and Angelo Ogbonna in his search for the centre-back he dislikes the least as Issa Diop’s partner. Pellegrini picked them both five times last season – the only league matches Diop didn’t start – of which West Ham lost four and drew one. Last weekend, when Diop was taken off with just under half an hour to play, Pellegrini was so loth to play them both he brought Carlos Sánchez on and shifted Declan Rice into the back line. At Stamford Bridge, with Diop suspended, he must choose either to pair them both or start Rice in defence for the first time since the end of the 2017-18 season. With the 33-year-old David Martin expected to make his top-flight debut in goal in place of the underperforming Roberto, the fourth-worst Premier League team will head to the division’s fourth-best side with a reshaped and under-strength backline, in which not even the manager has confidence. SB

According to Graham Potter it was “a little bit strange” to be awarded a new six-year contract at Brighton because “we haven’t done anything”. Potter’s modesty is not an affectation and it is true that, six months into his tenure, Brighton have not quite stopped the world turning on its axis. But there are still times in football when slow and steady can win the race, and Potter’s reconfiguration of the Seagulls’ approach – adopting a progressive, modern style while sitting comfortably in mid-table – has gone exactly as Tony Bloom would have wanted. There have been fluctuations along the way but when Brighton lose they usually do so creditably, with Pep Guardiola making a point of praising Potter’s methods after Manchester City defeated them in August. They will undoubtedly set up to ask questions of Liverpool too. Brighton are in the middle of what, on paper, is a tough run of fixtures but their long-term commitment to the blueprint Potter has put in place gives them considerable cause for comfort. NA

4) Time running out for Silva to recapture early swagger

Everton are not the only club that might feel shamed by the quality of work done by Brendan Rodgers within nine months of his arrival at Leicester, but a comparison with the last time these two sides met at the King Power Stadium highlights their wildly divergent directions of travel since. In October 2018, with Marco Silva still getting his feet under the table, Everton produced an exhilarating away performance, winning 2-1 and threatening more. “This is our image,” Silva said afterwards. “It will be so in the future and more.” Saturday’s rematch would be an apposite occasion for Silva to prove he can keep his promises, then, given that anything bar a rapid upturn in form and performance is likely to spell the end of his tenure. It is difficult to know what to make of Silva as a manager: there was always the sense that his talents were overhyped somewhat after he made an admittedly respectable fist of keeping Hull in the top flight two and a half years ago and he has shown little to suggest any extraordinary talent since then. Time is running out for him to change that opinion but a repeat of last season’s showing against opponents in irresistible form should buy him a little bit more. NA

When Wolves thrashed Sheffield United 3-0 at Molineux in February 2018, no one was talking about Chris Wilder’s team “doing a Wolves”. And, well, they haven’t, not exactly. But here both clubs are less than two years later, meeting with each side perched just outside the Champions League qualification places. Wilder and Nuno Espírito Santo have done superb jobs in different ways and a whole raft of players have risen to heights they were not widely expected to reach. Wolves’ Matt Doherty and United’s Enda Stevens, for instance, both played in that game in 2018 and now can be classed among the best wing-backs in the Premier League. In fact, the only members of United’s likely rearguard on Sunday who did not play on their club’s last visit to Molineux are John Egan and the goalkeeper Dean Henderson. They have made huge impacts since joining the club and, assuming they play on Sunday after missing last week’s draw with Manchester United, they will be big factors in ensuring Wolves do not have it so easy this time. PD

6) Only a miracle can save Emery now

Arsenal stagger to Carrow Road to face opponents who, in some ways, present a miniature version of what they ought to be. Norwich may well be relegated this season but there is so much to admire about the uncompromising belief in high-tempo, fluid attacking football held by Daniel Farke and the club’s sporting director, Stuart Webber. In fact Webber, who is just 35 but one of the most impressive executives around and surely destined for a top job, is precisely the kind of figure Arsenal would have benefited from employing in a high position but instead they lurch on in hope more than expectation. It is getting to the point where Unai Emery needs something approaching a miracle; Arsenal may well win at Carrow Road but the cracks it would paper over are huge.

7) Will Mourinho stick with Winks or twist with Ndombele?

The last time José Mourinho faced Eddie Howe was last November, when Bournemouth dominated the first half against Manchester United – even if the score when it ended was 1-1. “At half-time I thought I was the luckiest manager in the Premier League, to be at 1-1 in a half in which it should be 5-2 or 6-2,” Mourinho said afterwards. “We were really lucky because we were really poor.” In the second, however, United took control, even if it took until the second minute of stoppage time for Marcus Rashford to score the winner. The tactical switch that worked for Mourinho then was to exactly the system he has so far favoured at Spurs, bringing Ander Herrera on to form a double pivot with Nemanja Matic at the base of midfield, just as Harry Winks and Eric Dier have done at Tottenham, in an out-of-possession 4-2-3-1. Received wisdom seems to be that Tanguy Ndombele will replace Winks for this game, but the Englishman might be better able to replicate the deep-lying, match-turning display from Herrera that Mourinho is unlikely to have forgotten. SB

Last week Watford extended to six their run of successive matches in which they have been forced through injury to make a first-half substitution, and in all competitions there have been eight in their past 10 games. This statistic is extraordinary: no other team has made more than three first-half substitutions in this season’s Premier League, and Southampton are one of four sides (the others being Burnley, Leicester and Arsenal) not to have made any at all. The other 19 top-flight clubs have made a total of 688 substitutions so far this season, of which 3.9% have been before half-time. Watford’s figure is 16.2%. Having won only one league game so far, the Hornets’ tactics have clearly been failing this season – but so have their bodies. SB

9) Wesley needs to enhance his game with goals

The last time Aston Villa travelled to Old Trafford – in April 2016 – they lost 1-0 and were relegated. Hear this now: Villa are too good to go down this season, especially if Jack Grealish stays fit. Their prospects would be even brighter if Wesley started scoring regularly. The striker does plenty of admirable work but has had opportunities to score much more than four goals in 13 league games. Villa could pose United a lot of trouble in midfield on Sunday, particularly if Scott McTominay is not in top condition, but they will probably need Wesley to be clinical if they are to complete a significant victory. PD

On recent form this would be a home banker, but these are two of the division’s streakier sides. What an opportunity this is for Burnley, though, especially given that the two sides directly above them – Wolves and Sheffield United – face each other on Sunday. They could finish the weekend in fifth spot and the way Sean Dyche has cajoled his team back to their old levels over the last 12 months cannot be understated. Burnley could have sunk but instead a largely unchanged squad looks stronger than ever. Their centre-forward pairing, Ashley Barnes and Chris Wood, make an unorthodox sight in modern football at 6ft 1in and 6ft 3in respectively but, with six goals each already, perfectly embody Dyche’s ability to extract the maximum. It is no surprise that the clamour for him to be presented with an opportunity at a bigger club is getting louder and a third successive victory on Saturday would add to the noise. NA