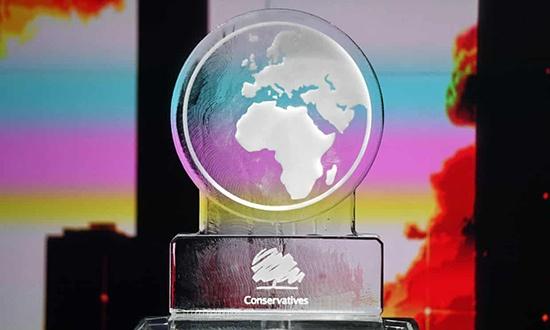 This melting ice sculpture stood in for Boris Johnson in the Channel 4 debate. Photograph: Kirsty O’Connor/PA

The Conservatives are threatening to review Channel 4’s broadcasting remit if they win the general election after the channel decided to replace Boris Johnson with a melting ice sculpture during its climate change debate.

A Tory source confirmed that the party would review Channel 4’s public service broadcasting obligations if Johnson is returned to Downing Street next month. Under the proposal, first reported by BuzzFeed News, they would “look at whether its remit should be better focused so it is serving the public in the best way possible”.

Channel 4’s licence runs until the end of 2024, meaning it would need renewing under any new government if the next parliament lasts a full five years. While the media regulator Ofcom is tasked with reviewing the channel’s output, Channel 4 is state-owned and its existence is underpinned by legislation that could be altered by parliament.

A Conservative spokesman, Lee Cain, said he had written to Ofcom demanding an investigation, claiming Channel 4 had breached the broadcasting code with “a provocative partisan stunt” that constituted “making a political opinion in its own right”.

He accused Channel 4 of a “wider pattern of bias” after the cabinet minister Michael Gove turned up at the TV studio alongside the prime minister’s father, Stanley Johnson, but was not allowed to take Johnson’s place. The broadcaster said this was because the debate was only for party leaders.

Earlier speculation that the ice would be carved in a representation of the prime minister proved wide of the mark. The Brexit party’s Nigel Farage got the same treatment after also refusing to go head to head with other leaders.

The Conservatives are in negotiations with the BBC over Johnson’s public appearances in the election campaign, having failed to agree a date for the prime minister to take part in a one-on-one interview with Andrew Neil.

Every other party leader has agreed to subject themselves to a half-hour examination on primetime television by one of the BBC’s toughest political interviewers. Labour believes that Johnson is trying to back out of this commitment.

Johnson told BBC News that he would do “all sorts of interviews with all sorts of people”. This has angered Labour, which claims it only put Jeremy Corbyn up for interview after being told the prime minister had also agreed a Neil interview next week. The BBC strongly insists it never said the booking was confirmed.

To confuse matters further, the Conservatives have now proposed Johnson should appear on the BBC One’s Sunday morning Andrew Marr Show, although it is unclear whether this is an attempt to avoid Neil’s scrutiny.

There has been a breakdown in relations between the Conservatives and Channel 4, with the Tories privately saying it is an explicitly leftwing outlet and will not give them a fair hearing, especially after comments made this summer by its news chief, Dorothy Byrne.

Ben de Pear, the editor of Channel 4 News, said the decision to replace Johnson and Farage with frozen water was justified. “These two ice sculptures represent the emergency on planet Earth, not in any human form but are a visual metaphor for the Conservative and Brexit parties after their leaders declined our repeated invitations to attend tonight’s vital climate debate.”

Clive Lewis, the shadow Treasury minister, said: “Boris Johnson is a coward and a bully. He thinks he is born to rule and is so used to getting his own way that he turns nasty when anyone dares challenge him. Britain deserves a prime minister that has enough of a backbone to face up to scrutiny.”

A Conservative party spokesperson said: “We are deeply disappointed that Channel 4 News has conspired with Jeremy Corbyn to block the Conservatives from making the case for tackling climate change and protecting the environment in this evening’s debate.

“Under this government the UK was the first advanced economy in the world to legislate for a net zero target and we’ve reduced emissions faster than any other advanced economy while continuing to grow our economy.

“Broadcasters have important responsibilities to present a balanced debate representing all parties, and Michael Gove was well qualified to represent the Conservative position at this evening’s debate.”