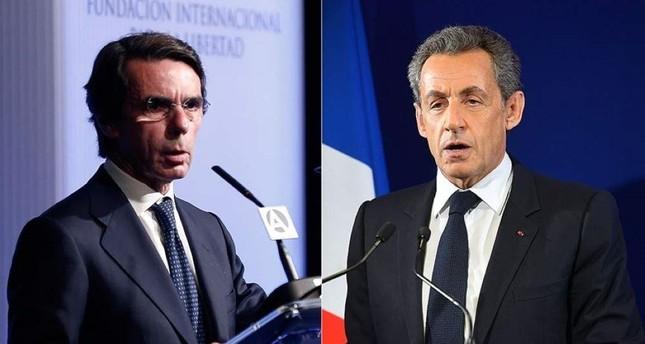 World axis is shifting from the West to the East, former French President Nicolas Sarkozy said.

“Only 800 million people live in Europe out of 7-billion world population, and Europe is no longer the center of the world due to demographic reasons,” Sarkozy told a forum in Madrid which he participated with former Spanish Prime Minister Jose Maria Aznar.

The two former leaders argued that Europe and the West are heading toward collapse, and called on democratic and conservative political parties to stop watching and take action.

Sarkozy said the current crisis in Europe is caused by overaged politics, adding that Europe should stop “obsessing” with the past and focus on the future.

Social media created a new trend in Europe putting pressure on leaders to seek approval of every segment of society, “whereas the solution of global problems requires leadership,” he added.

“In our society, however, leadership is now being portrayed as something that is not legitimate. The world is moving at a great speed, and leaders are waiting for the opinion of even a minor association to take action. This is not democracy,” he said.

– ‘Trump not the cause of the collapse of the West, but a sign of it’

Responding to a question about U.S. President Donald Trump, Sarkozy said: “Trump is not the cause of the collapse of the West, he is the sign of it.”

“The fact that Trump was elected president in a country with the world’s No. 1 military and economic power says a lot about American society.

“I like seeing a strong leadership of the U.S., but I don’t think this strength will ever be provided by a tweet,” he added.

Aznar also said for his part that without NATO, the EU alone cannot cope with “Brexit, Russia, terrorism, and cybersecurity.”

“The liberal order is challenged for the last 30 years following the fall of the Berlin Wall. It does not make sense to establish a European defense force without NATO. It is also impossible without the U.S. commitment to secure stability. It is best to rebuild and reshape NATO,” he added.

Aznar and Sarkozy also said that conservative and democratic liberals in Europe “lost the fight,” describing Brexit as “a dramatic event that goes against history and a madness.”