Martin Scorsese’s acclaimed Netflix drama The Irishman has picked up this year’s top award from the National Board of Review, a sturdy indicator of Oscars success.

The crime saga, starring Robert De Niro and Al Pacino, was named 2019’s best film, following in the footsteps of Green Book last year which went on to win the Academy award for best picture.

“We are thrilled to award The Irishman as our best film,” said the NBR president, Annie Schulhof, in a statement. “Martin Scorsese’s masterful mob epic is a rich, moving, beautifully textured movie that represents the best in what cinema can be.”

Steven Zaillian also picked up the prize for best adapted screenplay for the film. But Scorsese missed out on the award for best director which instead went to Quentin Tarantino for his 60s-set hit Once Upon A Time in Hollywood.

The lead acting prizes were handed to Adam Sandler for the indie thriller Uncut Gems and Renée Zellweger for the musical biopic Judy. Supporting awards were given to Brad Pitt for Once Upon A Time in Hollywood and Kathy Bates for Clint Eastwood’s Richard Jewell.

The National Board of Review is a New York-based organisation made up of “a select group of knowledgeable film enthusiasts, academics, and film-makers”. 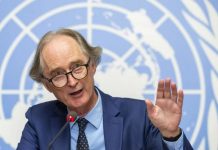 New round of talks on Syria’s constitution begins in Geneva