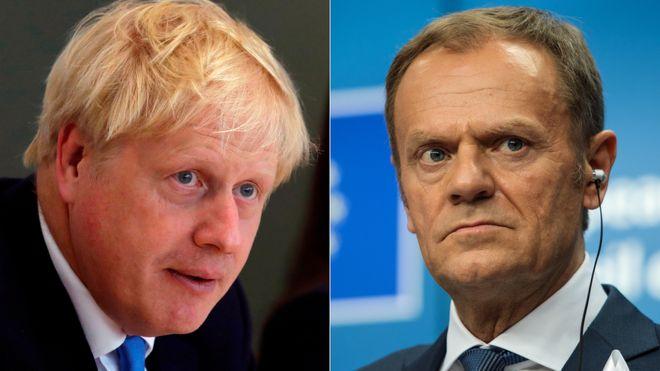 Exclusive: Donald Tusk says it would still be better for both sides if UK stayed in EU

Jennifer Rankin in Brussels  –  The Guardian

Brexit has been “one of the most spectacular mistakes” in the history of the EU and followed a campaign marked by “an unprecedented readiness to lie”, Donald Tusk has said.

In his first interview since standing down as European council president last week, Tusk said Brexit was “the most painful and saddest experience” of his five years in office, a tumultuous period marked by the Greek eurozone crisis, bitter rows over migration and the election of Donald Trump.

“If we want to treat Macron as a future leader for the whole of Europe, in a political sense, then for this we need a politician who feels more responsible for the EU as a whole and not only for France,” Tusk said.

The unabashed anglophile, who recently said he would “in my heart always be a remainer”, put himself at odds with other EU leaders by declaring it would still be better for both sides if Brexit did not happen. Many EU diplomats fear any second referendum leading to a remain result would mean festering divisions in the UK that would block the EU from making decisions – a view Tusk strongly rejected.

“The only difference would be that they [the UK] will still be here. They will be divided anyway: 50/50,” he said. “It’s pure illusion [to think] that it is easier to build good relations with the UK when they are outside.”

He blamed the former prime minister David Cameron for the “mistake” of organising the referendum that “he had no chance to win”. Tusk also revealed that when the two men spoke the morning after the vote, he still hoped the decision could be undone.

“I asked him: ‘Is it a decision, is it an obligation to follow this result?’” When Cameron made plain it was, Tusk said he continued to hope. “My intention was to at least prolong the whole debate in Europe and also in the UK. With this, maybe [it was] a little bit naive [to] hope that it could be reversible.”

Tusk said he predicted the leave victory “two or three months before the referendum” when he visited friends in Bath, who told him they were torn over their decision.

A former Solidarity activist who was briefly jailed by Poland’s Soviet-controlled communist government, Tusk was the prime minister of Poland before he became European council president in 2014. In that role chairing EU summits, he found it painful to be “more a chairman than a leader” and felt frustrated that he “restrained” himself from campaigning in the UK.

He has been one of the EU’s most outspoken leaders, a trait he shares with the French president. Tusk described Macron as “a hope for the future of Europe” and a true friend, but said he had problems with his “very new ideas and opinions”. As well as Macron’s comments on Nato, Tusk also objected to Macron’s rapprochement towards Russia, saying he was “disoriented” by this new narrative.

The council president said he was really proud of having once been labelled “a monomaniac” about Russia by a Belgian newspaper. His term began soon after the EU agreed sanctions against Russia, following the annexation of Crimea and incursions into eastern Ukraine.

“If we are not able to protect the Ukraine against Russian aggression it will not only be a problem for Ukraine but for Europe as a whole. My hope was that Emmanuel Macron would also be very consistent here.”

Tusk, who prides himself on his knowledge of European history, was also critical of Macron’s refusal to open talks with North Macedonia and Albania. The French “non” has plunged leaders in the region into despair, including North Macedonia’s prime minister, Zoran Zaev, who faced down nationalists to end a long-running name dispute with Greece.

“I think it was just strategically and politically a huge mistake to say no … after so many efforts and sacrifices, especially in Skopje.”

He said Europe would be less secure as a result of the decision, echoing arguments in the region that uncertainty about a European future risked triggering instability.

He compared Macron unfavourably to Angela Merkel, who has championed integration with six western Balkan nations. “Her unique advantage was to be always ready to think about Europe as a whole. And [to be] ready to sacrifice some internal or national interest to protect Europe as a whole.”

But migration is still “the biggest problem” the EU faces, as a result of historically large numbers seeking asylum or work in Europe. Tusk said it was “presently unsolvable”, adding: “This new version of migration, the numbers, the determination of the people who want to come to Europe, it is something really new but also a permanent situation for the future.”

Tusk was speaking to the Guardian and six other European newspapers on the second day of his job as president of the European People’s party (EPP), the centre-right bloc that includes the political forces of the German chancellor and Jean-Claude Juncker.

One of his most urgent tasks will be to decide whether Viktor Orbán’s Fidesz party remains in the EPP. After years of foot dragging, EPP leaders set up an inquiry into the rule of law in Hungary, amid growing concern about pressure on independent media, restrictions on NGOs and Orbán’s use of the EU as “a cash register” to channel lucrative contracts to his friends and family.

Tusk said he planned to issue a recommendation in February, after the inquiry team reported later this month. “It’s for Orbán to decide if wants to be part of this world of values or not,” Tusk said. “This decision should not wait another two years.”

He said the biggest threat to the EU came from governments, such as Poland and Hungary, that “don’t want to treat our values seriously” while getting all the benefits of the EU. But he does not think Brussels should have more powers to tackle this problem: “Without goodwill we have no chance to survive,” he said. “But this is also the beauty of the EU.”

He stressed the threat to liberal democracy was a bigger problem.

Citing the 2016 US presidential race and the Brexit campaign, he said a new element in politics was “the unprecedented readiness to lie on almost everything … to treat a lie as a justifiable tool to win”. He said this “shameless” behaviour would have disqualified politicians only 10 years ago.

Asked by the Guardian to specify who he had in mind, Tusk replied: “I don’t want to be too spectacular in my first interview … I have enough problems in my own country with professional and pathological liars.”