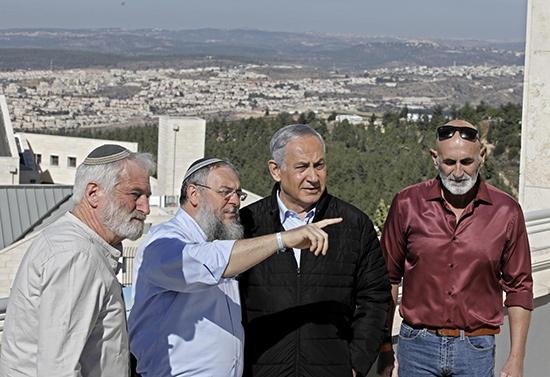 The move would surely draw condemnation from the Palestinians and much of the world and almost certainly extinguish any remaining Palestinian hopes of gaining independence.

LISBON, Portugal: Israeli Prime Minister Benjamin Netanyahu said Thursday that Israel has the “full right” to annex the Jordan Valley if it chose to, even as the chief prosecutor of the International Criminal Court warned the country against taking the bold step.

Netanyahu said his proposal to annex the strategic part of the occupied West Bank was discussed during a late-night meeting with U.S. Secretary of State Mike Pompeo. He said they also agreed to move forward with plans for a joint defense treaty.

The longtime Israeli leader, beleaguered by a corruption indictment and political instability at home, is promoting the two initiatives as a justification for staying in office.

The Trump administration has already delivered several landmark victories to Netanyahu, such as recognizing Jerusalem as Israel’s capital and recognizing Israel’s annexation of the Golan Heights. Netanyahu says that thanks to his close relationship with Trump, he is singularly positioned to further promote Israeli interests at this junction before the 2020 U.S. election season heats up.

The move would surely draw condemnation from the Palestinians and much of the world and almost certainly extinguish any remaining Palestinian hopes of gaining independence.

The Palestinians seek all the West Bank, captured by Israel in 1967, as the heartland of their hoped-for state. The Jordan Valley comprises some 25% of the West Bank and is seen as the territory’s breadbasket and one of the few remaining open areas that could be developed by the Palestinians.

But many Israelis say the area is vital to the country’s security, providing a layer of protection along its eastern flank.

In her annual report, ICC chief prosecutor Fatou Bensouda warned Israel against annexing the territory. “The Office has also followed with concern proposals advanced during the recent electoral process, to be tabled to the Knesset, for Israel to annex the Jordan Valley in the West Bank,” she wrote.

When asked by reporters about it, Netanyahu insisted that it is Israel’s “full right to do so, if we chose so.”

Netanyahu’s visit with Pompeo was their first since the secretary of state announced last month that the U.S. no longer considers Israeli settlements illegal under international law. Israeli nationalists have interpreted that policy change as a green light to begin annexing parts or all of the West Bank.

Netanyahu called their 1 hour and 45 minute-meeting in Lisbon “critical to Israeli security.”

In particular, he noted the progress they made toward a joint defense pact that would offer Israel further assurance against a future attack from Iran. He said he has informed his chief rival, former military chief Benny Gantz, of the progress in the initiative.

Israeli defense officials, and Gantz as well, have expressed concern that such a pact could limit Israel’s freedom to operate militarily. Netanyahu said he was aware of the reservations but assured that it was a “historic opportunity” and Israel would not be limited to act against archenemy Iran.

The trip gave Netanyahu a brief respite as he fights for political survival in the wake of two inconclusive elections and a damning corruption indictment. He refused to discuss his future options but vowed to carry on.

It is the first time in Israeli history that a sitting prime minister has been charged with a crime. Unlike mayors or regular ministers, the prime minister is not required by Israeli law to resign if indicted. Netanyahu is desperate to remain in office, where he is best positioned to fight the charges.