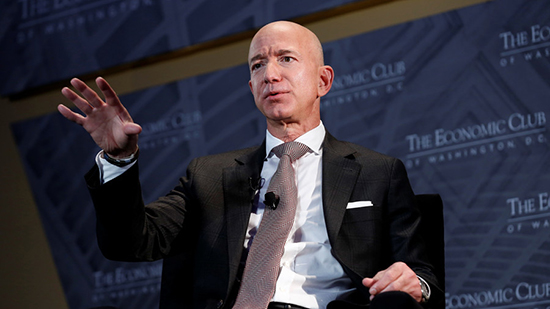 Amazon is alleging that US President Donald Trump abused the power of his office to deny the company a massive military cloud computing contract, court documents released Monday showed.

The technology giant is challenging the awarding of a $10 billion Pentagon cloud computing contract to Microsoft, alleging “unmistakable bias” in the process.

The 10-year contract for the Joint Enterprise Defense Infrastructure program, better known as JEDI, ultimately will see all military branches sharing information in a system boosted by artificial intelligence.

A heavily redacted filing detailed alleged errors that ended with Microsoft being chosen over the Amazon Web Services (AWS) cloud computing division, part of the technology group led by Amazon chief Jeff Bezos, a frequent target of the US president.

“They were the result of improper pressure from President Donald J. Trump, who launched repeated public and behind-the-scenes attacks to steer the JEDI contract away from AWS to harm his perceived political enemy – Jeffrey P. Bezos,” the filing maintained.

“DoD’s substantial and pervasive errors are hard to understand and impossible to assess separate and apart from the president’s repeatedly expressed determination to, in the words of the president himself, ‘screw Amazon.’”

The bid protest filed in US Court of Federal Claims urges that the rival JEDI bids be re-evaluated and a new decision reached.

“The question is whether the president of the United States should be allowed to use the budget of DoD to pursue his own personal and political ends,” Amazon said.

Amazon was considered the lead contender to provide technology for JEDI, with AWS dominating the cloud computing arena and the company already providing classified servers for other government outfits including the CIA.

But the Pentagon delayed awarding the hefty contract, saying the process would be reviewed by newly appointed Defense Secretary Mark Esper, who was selected by Trump.

A recent book on the tenure of Esper’s predecessor James Mattis, written by his speechwriter Guy Snodgrass, contends that Trump told Mattis to “screw Amazon” out of the contract.

The Pentagon has maintained that the bidding process was fair and in keeping with the normal way of awarding contracts.

“There were no external influences on the source selection decision,” defense spokeswoman Elissa Smith said in response to an AFP inquiry.

“The department is confident in the JEDI award and remains focused on getting this critical capability into the hands of our war-fighters as quickly and efficiently as possible. ”

Trump has repeatedly lashed out at Amazon and company founder Bezos, who also owns The Washington Post. The newspaper is among US media outlets most critical in its coverage of Trump and his administration.