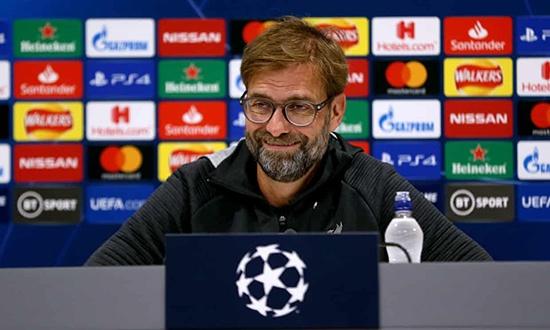 Liverpool manager Jurgen Klopp has apologized after he humiliated the translator prior to the Reds’ crunch UEFA Champions League encounter with RB Salzburg.

At the pre-match press conference in Austria – where Klopp’s defending champions needed at least a draw to guarantee progress to the knockout stages – the Liverpool boss lost his cool at what he deemed to be sloppy skills from the translator.

The unfortunate linguist was translating an answer from Liverpool skipper Jordan Henderson, seated next to Klopp, who was asked about the Reds’ approach to the game given their status as defending champions.

The translator took Henderson’s answer to be that Liverpool would “go easy” in the encounter – prompting Klopp to step in.

“It’s sh*t when next to the translator sits a coach who speaks German,” Klopp fumed in German.

“The question was if the Champions League title from the last year helps us because we have always delivered in situations like this.

“He [Henderson] doesn’t talk about going easy in this game. We are aware of this challenge. He is speaking about all this normal stuff.

“You should really listen. Otherwise, I can do it by myself. It’s not too difficult.”

He then added in English: “I am in a competition mood already, I can tell you.”

But perhaps unburdened by pressure after Liverpool’s 2-0 win, which secured them top spot in Group E, Klopp apologized to the translator at the post-match press conference.

“I would like to say sorry for yesterday,” Klopp said in German. “It’s not the right way to do it, to criticize in public in this way.

“I didn’t like the translation, but the way I said it was stupid, I have to be better and I apologize,” he added, shaking hands with the translator.

Switching to English, Klopp added: “Sorry, I was an idiot.”

Liverpool claimed a comfortable win in Salzburg thanks to goals in the space of two second-half minutes, the first from Naby Keita and the second a superb strike from a seemingly impossible angle by Mohamed Salah.

It ensured they finished one point ahead of Napoli in Group E, meaning Liverpool will be among the seeds for the knockout stage draw which takes place in Nyon, Switzerland on Monday December 16.