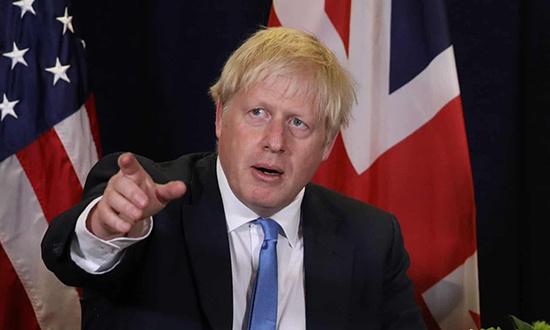 Boris Johnson has claimed he wants to “let the healing begin” over Brexit, pitching himself as the prime minister of a one-nation government after winning the largest Conservative majority since Margaret Thatcher.

Speaking outside Downing Street, Johnson said the NHS would be his top priority in government, and the country needed “a permanent break” from the issue of Brexit after three and a half years of bitter division.

The prime minister gave his speech a few hours after visiting the Queen to inform her he had the support to lead a government, after the Conservatives won an 80-seat majority with the help of previously Labour-held seats across the north of England, the Midlands and Wales.

After a disastrous night for Labour, Jeremy Corbyn said he was “very sad” about the result and signalled he would step down in the early part of next year, triggering a wave of speculation about the future direction of the party. Corbyn stopped short of apologising for Labour’s worst performance since 1935.

Johnson acknowledged that the Tory victory, the largest since 1987, had been won with the votes of some traditional Labour supporters who may have been anxious about their choice.

‘Not my prime minister’: protesters clash with police after Boris Johnson elected – video

In a direct message to those people, he said: “To all those who voted for us for the first time, all those whose pencils may have wavered over the ballot and who heard the voices of their parents and their grandparents whispering anxiously in their ears, I say thank you for the trust you have placed in us and in me.”

After bad weather delayed the transportation of ballot boxes from the Isles of Scilly, the final result – a Tory win in St Ives – was declared on Friday afternoon, leaving the prime minister with a total of 365 seats. Labour lost 59 seats to finish with 203.

Earlier, Johnson had sounded a triumphalist tone about Brexit, saying the case for a second referendum was now over and those with pro-EU megaphones should “put a sock in it”.

However, he changed tone in his mid-afternoon address, saying he wanted remainers to know that “we in this one-nation Conservative government will never ignore your good and positive feelings – of warmth and sympathy towards the other nations of Europe.”

And despite his main message of the election having been about “getting Brexit done”, Johnson insisted his main priority would now be the NHS, an institution that voters have traditionally trusted Labour more to protect.

“I frankly urge everyone on either side of what was, after three and a half years, after all an increasingly arid argument, to find closure and to let the healing begin,” Johnson said. “Because I believe – in fact, I know, because I have heard it loud and clear from every corner of the country – that the overwhelming priority of the British people now is that we should focus above all on the NHS.”

Johnson will turn his attention to a cabinet reshuffle early next week, a Queen’s speech on Thursday and an attempt to pass part of his Brexit bill by Christmas.

He will have little trouble getting parliamentary support for the deal, as his gamble of triggering a snap poll in the hope of winning leave-supporting seats has paid off with a net gain of 47 Tory MPs compared with 2017.

The former mining constituency of Blyth Valley, in Northumberland, was an early Conservative gain, bearing out the exit poll’s prediction of a large Tory majority. It had been held by Labour since its creation and was No 116 on the Tory target list.

Scores of other long-held Labour seats, including Workington, Wrexham, Great Grimsby and Bishop Auckland, turned blue as the night went on, and the Conservatives secured a majority just after 5am.

The Liberal Democrats also had a disastrous night as they failed to make headway and their leader, Jo Swinson, lost her seat. Speaking late on Friday morning, Swinson said she was devastated by the result but unapologetic about being the “voice of remain in this election”.

Though it was a good night for the Conservatives in England, the party lost seven seats to the SNP in Scotland. The first minister, Nicola Sturgeon, said the result – her party won 47 of the country’s 59 Westminster seats – was more evidence that Scotland wanted to remain in the EU, and she announced plans to publish a blueprint for a new Scottish independence referendum next week.

The Greens held their one seat in Brighton Pavilion. Nigel Farage’s Brexit party failed to take any seats in Labour heartlands as it had promised to do.

The postmortem on where Labour’s campaign went wrong continued after a high-profile intervention by the Unite union boss, Len McCluskey. He joined voices at the top of Labour, including the party’s chair, Ian Lavery, in blaming the decision to back a second referendum on any Brexit deal it would have negotiated with the EU.

In an excoriating attack on the party’s Brexit stance – said to have been advocated primarily by the shadow chancellor, John McDonnell, and pushed by the expected leadership contenders Emily Thornberry and Keir Starmer – McCluskey said this had been the immediate cause of lifelong Labour voters’ alienation from the party.

He said Labour’s base had begun to drift in the Blair and Brown periods and this had speeded up with a “collapse into the arms of the People’s Vote campaign”. An “incontinent rush of policies” and the failure to apologise for antisemitism in the party were also to blame, he said.

MPs keen to see an immediate replacement for Corbyn will try to secure a meeting of the parliamentary Labour party early next week. There are hopes that one could be called on Tuesday as plans are being mooted among MPs to nominate an interim leader should the PLP rulebook allow them to do so.

This is to counter an expected rush by the party’s national executive committee, whose members back Corbyn, to take hold of the leadership succession arrangements, especially as there is no deputy leader after Tom Watson stood down.

Margaret Hodge, a vocal critic of Corbyn, said she would back PLP moves to adopt an interim leader. Another MP said they needed to act fast and would like to see a caretaker in place immediately. Senior party figures mooted for that position include Margaret Beckett, Hilary Benn and Yvette Cooper.

Labour’s centre-left Tribune group, which had around 90 MP members before the election, will try to meet within the first few days back in parliament to take soundings on who they think should replace Corbyn.

However, one centrist MP urged Corbyn not to go too quickly because it would put “all the power in the hands of the NEC”.

John Cryer, the PLP chair, is said to have been approached by MPs asking him what powers they have to organise for an interim leader.