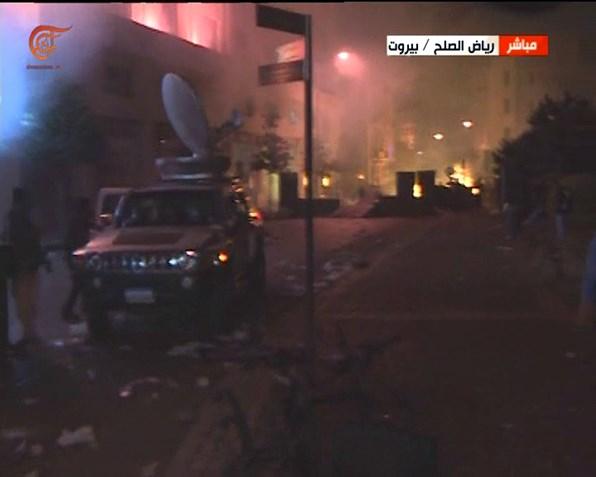 Hezbollah and Amal then called on the group of men to withdraw from the streets of Beirut to avoid further sectarian tensions.

BEIRUT: Hundreds of protesters descended upon downtown Beirut after taking offense to a video circulating on social media that offended Shiite figures, clashing with riot police and Lebanese army soldiers.

The video targetted a number of Shiite religious figures and officials, including Speaker Nabih Berri and Hezbollah leader Hassan Nasrallah. It was reportedly recorded by Samer Al Saydawi a man hailing from Tripoli but now residing in Greece. Al Saydawi family was quick to condemn his actions, saying that “it does not reflect our views or beliefs.”

The statement, issued by the family, called on Samer to “apologize and return to the righteous path.” Lebanese authorities are reportedly looking into issuing an arrest warrant for Samer for inciting sectarian strife.

The men who took offense to the video were believed to be from al-Khandaq al-Ghamiq, who has had a number of run-ins with the law.

The angered men attempted to reach Martyr’s Square and Riad el Solh but were held back by riot police. They threw rocks and fireworks at both soldiers and riot police alike before water cannons were used to disperse them.

Hezbollah and Amal then called on the group of men to withdraw from the streets of Beirut to avoid further sectarian tensions yet their pleas fell on deaf ears.

A local Imam from Khandaq al-Ghamiq called on the men to withdraw as well while a senior Sheikh from Dar el Fatwa, the highest Sunni authority in Lebanon, distanced the sect from the offensive video.

“We tell our Shiite brothers that those who harm … do not represent the Sunni sect, have nothing to do with the sect and do not express the Sunni opinion,” Sheikh Hasan Merheb told local TV channel LBCI.

In Saida, a Sunni majority city, Amal supporters resorted to burning the tents of demonstrators before fleeing the scene. In response, dozens of men blocked roads leading the center of the city.

The clashes have mirrored the broader Sunni-Shiite conflict in the region, prompting a number of religious figures to call for restraint.

To avoid further deterioration, Hezbollah and Amal party officials also made their way to the Ring Bridge in an attempt to fasten the withdrawal of the men.

Following the broad campaign from officials and religious figures, the protesters seemingly retreated to the main road leading to Khandaq al-Ghamiq behind the Ring Bridge as calm was restored to downtown Beirut.