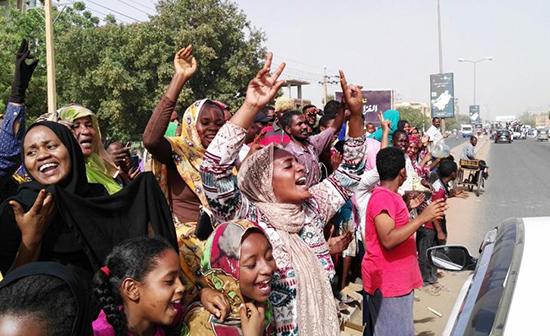 The overthrow of longtime ruler Omar al-Bashir may one day be remembered as the beginning of Sudan’s transition to democracy. But economic crisis and various military players threaten to derail the revolution.

Almost one year after protests over rising bread and fuel prices quickly turned into calls for Sudan’s longtime ruler Omar al-Bashir to step down, the Sudanese revolution has given cause for cautious optimism.

The December 2018 demonstrations triggered a military coup military coup that ousted al-Bashir in April. Until then, the authoritarian ruler had seemed invulnerable, jailing opponents, squashing civil demonstrations against his regime and commanding a bloody crackdown in the country’s south and west during his 30-year tenure.

Al-Bashir’s old veneer of invincibility cracked further on Saturday, when he was convicted on corruption charges. However, the deal brokered for a gradual transition to a stable civilian-led democracy remains fraught with risk.

The largely peaceful uprising was the culmination of years of civic institution-building and resistance under al-Bashir. Since his overthrow, it has delivered promising concrete steps.

Despite a massacre by the Rapid Support Forces militia that killed more than 100 in June, the opposition alliance Forces for Freedom and Change successfully negotiated a civilian-military Sovereign Council two months later to oversee a three-year transition before elections.

The subsequent appointment in August of Prime Minister Abdalla Hamdok, a well-respected economist, as well as a civilian Cabinetto form a transitional government in September was a major step, setting hopes high for measures that might ease the country’s financial predicament that first sparked demonstrations last year.

Overturning Sudan’s status as a pariah state will also be vital for economic aid. Hamdok’s visit to Washington early in December resulted in the appointment of a US ambassador to Khartoum for the first time in 23 years.

Rights for the marginalized

Hamdok’s government recently announced a list of 10 priorities that include addressing the economic crisis, fighting corruption and ending multiple long-running conflicts around the country. Hamdok also kept the demands made during the sit-ins and demonstrations which risked retaliation from al-Bashir’s security forces firmly in mind, including those from the women who were often at the vanguard of the protests.

In November, the transitional government repealed the public order laws imposed by al-Bashir’s Islamist regime that controlled how women dressed and acted in public. Hamdok tweeted a tribute to those who had “endured the atrocities” of a law that was used as a “tool of exploitation, humiliation and violation of rights.”

Sara Abdelgalil, a spokesperson for the Sudanese Professionals Association, a major force in the civil movement that helped topple al-Bashir, told DW that although women’s rights were one of the 10 transitional priorities, there were only six females among the 32 positions in the new Sovereign Council and Cabinet.

“That’s not enough,” Abdelgalil said. “Women during the revolution had been very visible…being detained, being killed, being subject to all the violence. Then we came to the negotiations and women became invisible.”

Analysts also see hope in renewed peace talks with rebel groups in the south bringing equity to those living outside Khartoum, the capital city which has retained the lion’s share of Sudanese power and resources for years.

Sudan expert Horner said that where past peace talks with rebels in the long-running conflicts in the Blue Nile, South Kordofan and Darfur used to be based on payments and patronage, the new administration is now looking to share power and decentralize government.

“They’re seeking to have much more of a genuine political arrangement now, and they’re seeking to make sure that the armed groups have a place in the new government based on their constituencies,” Horner said.

As for the autocrat himself, Horner said al-Bashir’s initial 2-year sentence for corruption was seen as a good first step and a sign of a healthy judiciary. Yet he warned it may still disappoint many of those at Sudan’s peripheries who suffered at his hands and wanted to see him brought to book for much more serious crimes.

They include the people of Darfur, victims of alleged ethnic-cleansing that Sudan expert Eric Reeves claims killed 600,000 by 2016. So far, the new government has declined to hand al-Bashir to the International Criminal Court to face allegations of genocide.

After losing oil revenues when South Sudan seceded in 2011, government fuel and bread subsidies cost US $93 million (€83 million) a month in 2019, according to former Prime Minister Motazz Moussa. Remaining on the US’ terror blacklist has also stifled private investment and debt relief from the IMF and World Bank.

Finance Minister Ibrahim Elbadawi told Reuters in November the country only had enough foreign currency reserves for a few weeks and needed up to $5 billion (€4.5 billion) in 2020 to avoid economic collapse.

Horner said the transitional government’s viability could hinge on its ability to deliver on economic goals and tackle systemic corruption.

Multiple other challenges lie ahead, including a fragmented security establishment prone to rivalry, the interests of regional players, the splintering unity of the opposition coalition and crucial aspects of transitional justice.

Sudan’s generals could spoil reforms if they perceive them as a threat to their interests. The country’s rebel groups have not been included in the transition deal so far and militias such as the powerful paramilitary RSF — elements of which are implicated in Darfur atrocities and have more recently proved their capacity to derail the transition in the June massacre — have not been brought under the umbrella of the army.

While Saudi Arabia and the UAE bolstered al-Bashir’s regime with cash and hired the RSF independently to fight in Libya and Yemen, Horner said the two Gulf countries have also been instrumental in supporting the democratictransition. However, their rival Qatar’s support for rebels in Darfur raises the risk of Sudan turning into a proxy battleground.

Abdelgalil said that constitutional reforms would be vital to resolving the credibility and validity of the increasingly polarized Islamist, secularist and socialist political parties. Transitional justice for the more than 200 killed in the uprising and the many more who suffered under al-Bashir’s 30-year rule will also be crucial to the government’s perceived integrity, she added.

While Abdelgalil said Sudan had much to be proud of after a revolutionary movement whose horizontal leadership and participation included all sections of society, the work is not done.

“The revolution will end when we have a complete civilian government, a successful election, an elected parliament, transitional justice and peace all over Sudan,” she said. “We are worried that we will have a coup. We are worried about internal violence and we are very cautious about it, but at the same time we are hopeful. So it’s hope and fear, that’s how we describe our emotions.”