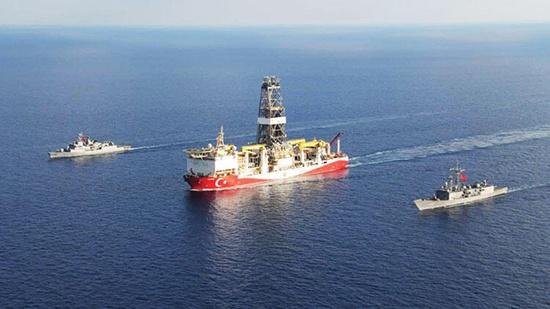 Turkey was eager to be part of the oil and gas rush in the Eastern Mediterranean for decades, but was sluggish in taking concrete action. It was slow in delineating maritime boundaries, because it had problems with almost all of its neighbors, and does not recognize the Cypriot government. It is practically at war with Syria. Relations with Egypt are at their lowest point. And it has multi-layered problems with Greece.

Two memoranda of understanding (MoU), signed last month between Turkey and Libya, have changed the landscape in the region: One for military cooperation, the other, importantly, on the delineation of the maritime boundaries.

Previous agreements signed between Egypt, Israel, Lebanon, Cyprus and Greece had already partitioned the Eastern Mediterranean among themselves without taking Ankara into consideration. What was left to Turkey was confined to the northern half of the narrow strip of sea between its Mediterranean shorelines and Cyprus.

Turkey persistently supported the school of thought that the islands should not have a continental shelf. This is important because the Anatolian mainland is surrounded by islands that belong to Greece. If islands are allowed to have their continental shelf, Turkey will be deprived of most of the natural resources that it believes belong to it.

In 1995, when the Greek parliament authorized the government to extend the width of territorial waters from six to twelve miles, the Turkish parliament took immediate action to consider such a move a reason to declare war. If Greece took such action, all Turkish harbors on the Aegean Sea would be sealed off from the world by the Greek territorial waters.

Bearing this background in mind, Turkey signed the MoU with Libya based on its approach that the islands’ maritime boundaries should be confined to their territorial waters. The sea space beyond that should be considered the continuation of the Anatolian continental shelf.

There is a tiny Greek island called Kastellorizo, with an area of 7.3 square kilometers, off the southern coast of Turkey, opposite the Kas district of Turkey’s Antalya province. It is 2.1 miles off the Anatolian mainland and 600 miles to the Greek mainland. It is inhabited by 500 people. Many maps do not show this island because of its small size. If we assume that this tiny island has a continental shelf, it will acquire a maritime area in the Mediterranean Sea, 2,000 times wider than its own surface. Turkey believes that this is inconsistent with the principle of equity.

The same criterion applies, on a different scale, to other Greek islands in the Eastern Mediterranean such as Crete, Rhodes and Karpathos.

The Turkish-Libyan agreement is based on the grounds that an island cannot have a continental shelf. It divides into two the sea area claimed by Egypt, Cyprus, Greece and Israel, and creates a 94 mile wide corridor between the two parts. This approach changes several paradigms of the partition of the oil and gas exploration parcels agreed previously between these countries.

The Turkey-Libya agreement is formulated as follows: If you take as reference the easternmost point of the territorial waters of three Greek islands in the Eastern Mediterranean, namely Rhodes, Karpathos and Crete, and draw a line from the Turkish coasts to the Libyan Exclusive Economic Zone, this line constitutes the western border of the corridor. When you draw another line 94 miles to the east of the first line, there emerges a corridor that drives a wedge between the Greek maritime boundaries and that of Egypt, Israel and Cyprus. If these countries want to carry their gas to Europe by pipeline, they will have to cross a corridor under Turkey’s jurisdiction.

Cyprus has signed a $9.3 billion contract with a group of oil and gas companies — Noble, Shell and Delek, from the US, the Netherlands and Israel respectively. These nations will seek ways to force Turkey and Libya to step back from this initiative.

Turkey says, if necessary, it will use military force to defend its rights. If this happens, it will be the worst case scenario, because it will have to face several stakeholders at the same time.