President Michel Aoun on Wednesday lashed out at caretaker Prime Minister Saad Hariri over his latest remarks and announced that the new government will be a “government of experts.”

Speaking to reporters in Bkirki after a closed-door meeting with Maronite Patriarch Beshara al-Rahi on the sidelines of Christmas Day mass, Aoun hoped Lebanon will “manage to overcome its current crisis” and that the Lebanese will have a new government as a “New Year’s gift.”

Asked about accusations that Free Patriotic Movement chief Jebran Bassil – his son-in-law – is the one forming the new government, Aoun said: “Let’s suppose that Jebran Bassil is the one forming the government, doesn’t he have the right to do so? Isn’t he an MP and the head of the biggest bloc? But no, in fact it is not him who is forming it. Those who are supposed to form it are forming it.”

Asked whether he did not want Hariri to form the new government, the president said: “Is that why we waited 100 days?”

“We waited for Saad Hariri for 100 days without managing to resolve the crisis. He was hesitant. This is not how we form a government,” Aoun added.

Told that Hariri has said that the Presidency is acting “as if nothing has happened in the country,” in reference to the economic crisis and the Oct. 17 popular revolt, Aoun answered: “Does he want to envy me for my calm which preserved calm in the country or for my foolishness which made me act in a bad way?”

The president’s remarks carried a veiled jab at Hariri for resigning amid the popular protests that have swept the country.

He also said he believes that there will be a “government of experts” and not a so-called techno-political government.

“I cannot work with these people anymore. He wants to run the country on his own and he must show moderation. How can one work with people who have a sectarian and racist rhetoric?” Hariri added. 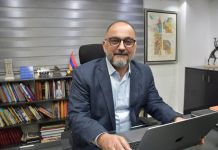