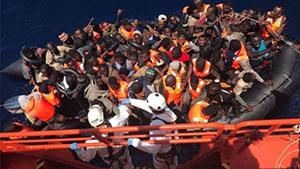 The boat carrying refugees from Pakistan, Bangladesh and Afghanistan capsized in Lake Van when it was approaching the eastern province of Bitlis. Some 64 migrants were rescued after the accident, Bitlis governorship said in a statement.

In addition to 3.6 officially registered Syrian refugees living in the country, Turkey also hosts migrants coming from elsewhere in the Middle East, Africa and Asia. The Interior Ministry estimates there are 1 million refugees from 37 countries in the country, bringing the total refugee population to some 5 million.