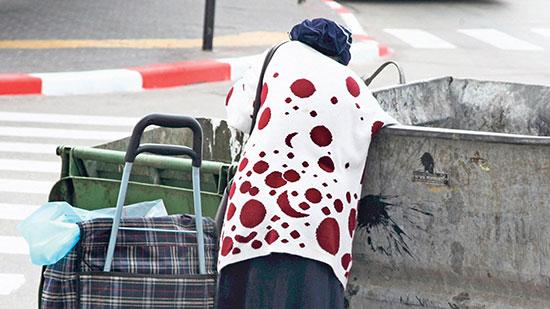 The poverty rate in Israel has grown by a percent over the last year – with a bigger increase in the number of children under the line of poverty, according to the poverty report for 2018 published by the National Insurance Institute of Israel (NII) on Tuesday.

Palestinian families living in eastern Jerusalem were not included in the study because of “difficulties to accurately sample the population and misguided results stemming from the reality in the neighborhoods”, according to an NII official.

Israel currently finds itself fourth from last in poverty within the OECD countries, with a poverty rate higher than in other countries such as the United States, South Korea, and Turkey.

An OECD report published several months ago, estimated the poverty rate amongst Israeli children to be 22%, second only to Turkey.

The poverty rate amongst the elderly has grown from 17.2% to 18.8%. The number of households living in poverty where the head of the family is an elderly person has risen from 21.8% to 23.4%.

The poverty gap within these same households has increased from 27.7% to 32%. Data also shows that the poverty rate is much higher in older families than younger ones.

The poverty gap among families with a single provider living in poverty has gone down by about 6% and about 5% for families with two providers.

Last year has also seen an increase in gaps between men and women. The poverty rate among women has gone up by 0.2%, with men’s going down by -0.8%, showing a continued increase in the wage gap between the sexes.

Prime Minister and caretaker Minister of Labor, Social Affairs and Social Services Benjamin Netanyahu praised the decrease in the poverty gap and number of those living in abject poverty, citing a 6.9% increase in income for families living in the lowest economic classes.

“We will continue to reduce the poverty rate in this country and work to increase retirement pensions for the elderly,” said Netanyahu.

NII Director General Meir Shpigler stated that although there are some encouraging data in the report, there is a lot to be done against poverty in Israel.

“The government must continue and work to decrease the poverty rate, especially among the country’s elderly,” Shipgler said. “The NII is raising pensions in accordance with the current average salary and not a fixed rate. This change is needed due to increasing average life expectancy – for the welfare of millions of senior citizens and it is our duty to make sure they live respectable lives.”