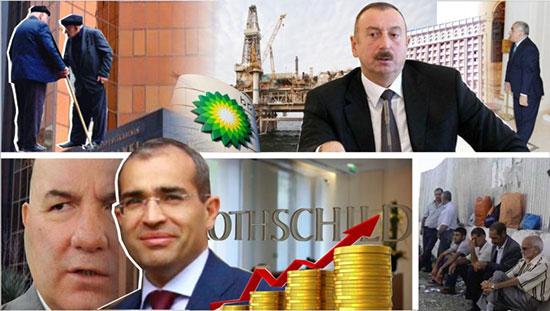 I- 28.01.19: President Ilham Aliyev signed a decree on the provision of large lump sum benefits of 11 thousand manats for all martyr families without exception.

IV- 12.03.19: The head of the Central Bank of Azerbaijan Elman Rustamov and the General Director of Rothschild & Cie Ariel Malard de Rothschild signed an agreement on strategic partnership in Paris.

V- 03.04.19: President Ilham Aliyev signed a decree “On deepening reforms in the judicial system of Azerbaijan”

VIII- 18.07.19: By presidential decree, the minimum wage in the country was increased to 250 manats.

IX- 23.11.19: Russian MTS concluded an agreement on the sale of its entire business in Ukraine (Vodafone Ukraine) for $ 734 million to Telco Solutions and Investments LLC, the “daughter” of Azerbaijani Bakcell

X- 18.12.19: President Ilham Aliyev signed the second package of legislative acts within the framework of reforms carried out in the judicial sphere.

Since the beginning of this year, the efforts to increase the social burden and responsibility of the economic policy of the state and to address the solution of social problems have continued until the end of the year. First, the minimum wage and pensions, social benefits were increased, and then salaries were raised for some categories of the state sphere. Thus, in 2019, the state put social welfare in its economic policy, giving long-term support for the settlement of overdue debts, while raising the limit on higher payments for gas payments and lowering consumer spending. These measures, which have been adjusted to positive changes, have mitigated the weight of the problems that have accumulated in the social sphere but have not been able to provide significant support for fundamental solutions of them. The main reason for this was the increase in unemployment and inflation in Azerbaijan, contrary to economic legality. Since the estimates of the State Statistical Committee distorted the existing reality for both indicators, although this proportionality could not be seen in official reports, living conditions in Azerbaijan have become more difficult than in neighboring countries, emigration and brain drain abroad have increased.[1] In spite of the wage increases in 2019, the average monthly wage is still higher than Azerbaijan in the countries, where the cost of the consumer basket is cheaper than that of us. Thus, according to the latest data from the CIS Statistical Committee[2] for January-September of the current year, the average monthly salary in Azerbaijan lags behind Russia as 2.1 times, Belarus as 1.43 times, Ukraine as 1.24 times, and Moldova as 1.18 times. The average monthly salary for that period in Azerbaijan is lower than that of Georgia as $ 44 and Armenia as $ 17. Although, by 2004, Azerbaijan surpassed Armenia by $ 14 per capita.

In addition, as the solution to the unemployment problem and social problems, in general, depends on the development of the non-oil sector, the results of 2019 could not be different in this regard. According to the SSC, the gross domestic product (GDP) produced in the country in January-November 2019 increased by 2.1 percent compared to the same period of the previous year, as well as the GDP of the non-oil sector by 3.5 percent, the GDP of the oil and gas sector by 0.2%. Apparently, economic growth in the non-oil sector over the reporting period surpassed the growth in the oil and gas sector. However, overall economic growth in 2019 was not high – only 2.1 percent. Although this figure represents a 0.7 percentage point increase compared to 2018, expectations have not been met. Because both official and international financial institutions have forecast higher growth this year. Thus, the IMF’s materials[5] released following consultations on Article IV said that economic growth in Azerbaijan will reach 2.7 percent in 2019 due to higher hydrocarbon production and higher domestic demand due to new spending measures. The Ministry of Economy of Azerbaijan predicted[6] economic growth this year at 3.1%. According to the World Bank’s report[7] on Europe and Central Asia, economic growth in Azerbaijan was expected to be 2.8 percent[8] this year. The World Bank has linked the driving force to growth in natural gas production, domestic demand support, real wages and continued growth in credit investments. As is seen, the expected economic growth in 2019 was lower than the forecast. The main reasons for this can be explained with 2.8% decrease in fixed capital investments in January-November 2019 compared to January-November 2018, its focus on consumption despite the increase in credit investments as of November 1, 2019, as well as the decrease in foreign investment and low execution of expenditures on capital investments of the state.

It should be noted that the first of the four target indicators set by the government in the Strategic Roadmap[9] for the future of the national economy by 2025 is “to increase the total share of direct foreign investments in the non-oil sector by 4%”. Therefore, a new draft law on investment activity and a strategy for promoting foreign direct investment, the mechanisms of promotion of “Invest in Azerbaijan” and “First in Azerbaijan”, an Action Plan for connecting businesses operating in the country to global value chains have been developed in 2019 to stimulate investment attractiveness.[10]

However, despite all this, the attraction of foreign direct investment in the national economy in 2019 was not satisfactory. At the same time, in the World Bank’s “Doing Business” report[11], which is considered a reliable source for evaluating the business environment, Azerbaijan ranked 34th, by regressing 9 ranks compared to 2018.

Presented positively for 2019 in the official prism are low inflation and external debt in the country. Thus, according to the SSC, as of December 1, inflation in the country was 2.6 percent lower compared to the same period last year. At the same time, according to the Central Bank of Azerbaijan (CBA)[12], as of December 1, the money supply in Azerbaijan amounted to 10 billion 674 million 500 thousand manats. Thus, from the beginning of the year, the growth of the money supply amounted to 1 billion 128 million 800 thousand manats or 11.8 percent, and the annual increase amounted to 1 billion 689 million 300 thousand manats or 18.8 percent. For reference, I note that in 2018 the growth of the monetary base was 12% or 1,002.5 million manats.

The impacts of monetary factors generating inflation are increased when monetary base growth is higher than GDP growth based on economic legitimacy. According to the results of 10 months of the current year, the growth of the monetary base in the annual calculation, which was 9 times more than the GDP growth, as well as the decline money velocity rate from 5.1 in January to 4.8 in November, the same period last year, cloud the SCC’s calculations on the inflation rate at the same level as in the same period of the last year. Because, when the monetary base rises and the manat turnover rate declines, stable inflation means that at least one of these indicators is not properly calculated. In our opinion, inflation is the indicator, which is not properly calculated and shown low again in official reports. However, statistical observations of prices show that in comparison with the last year, prices for goods, which especially have a higher weight in the consumption of the population, and services increased. In fact, since the rise of the monetary base is conditioned by wages and social payments, as well as consumer loans, its impact on increasing inflation is more expected. Therefore, without a doubt, 2019 inflation is over 10%.

According to the Central Bank of the Republic of Azerbaijan[13], as of December 1, the ratio of cash in turnover to the monetary base was 82.6%, as well as an increase in cash money out of banks for 10 months of 2019 by 19.1% informs about the expansion of the shadow economy and the ineffectiveness of changes in tax legislation.

With regard to foreign debt, $ 12.2 billion of credit agreements were signed with international financial-bank institutions and other credit organizations on July 1, 2019, of which $ 10.8 billion was used. Thus, external debt obligations per capita were $ 1,220 and per actual use – $ 1,080. According to the agreements, more than half of foreign debt must be repaid from 10 to 20 years.

In conclusion, I would like to note that the problems such as the monopoly barriers created by the expansion of “Pasha Holding” in 2019, the decline in the economy’s diversification rates, the loss of comparative advantage in international trade, the violation of balance of the trade and non-commercial sectors in the non-oil sector, expanding the scale of the shadow economy did not allow for the effective implementation of systematic, inconsistent and uncoordinated reform initiatives. On the contrary, the government, benefiting only from short-term interests in oil, has further strengthened the corrupt relationship between the government and business by accelerating populist and unjustified decisions in the non-commercial sector. As a result, the construction sector, which is a classic source of corruption in the distribution of oil revenues, and transportation infrastructure in construction, have become a priority in 2019. Though images of expensive projects implemented in these sectors, on the one hand, have become the leitmotif of government economic propaganda, on the other hand, the deterioration of the corruption rating (Azerbaijan fell 30 ranks in the 2019 report[14]), the weakening of the global competitiveness of the economy (from 39th in 2017 to 58th in 2019[15]), have strengthened unilateral dependence of economy on oil and gas resources and mainly led to its development in the non-commercial sector.

Lastly, the year 2019 was remembered by the stagnation in the economy, the “Pasha” factor in the business, the update in the personnel policy, the downward trend in the resolution of  Karabakh conflict, and the civic engagement in political life of country.

[3] Social and demographic indicators: Demand and supply of labor force at the register labor market in 2019 (end of October),  http://www.cisstat.org/eng/index.htm