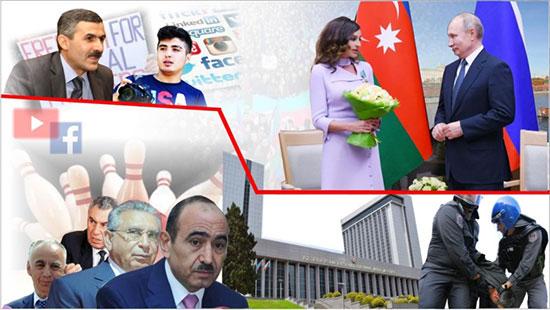 I- 01.17.19: The European Parliament adopted a resolution entitled “The Case of Mehman Huseynov in Azerbaijan” demanding his release.

II- 01.19.19: An opposition rally organized by the National Council of Democratic Forces was held at Mehsul Stadium.

III- 03.12.19: Prospects for the development of relations between Azerbaijan and France were discussed at the negotiations in Paris of the First Vice President Mehriban Aliyeva with the Prime Minister of this country Eduard Philippe and other officials.

IV- 03.16.19: President I. Aliyev signed an order to amnesty 399 prisoners, of which, according to human rights defenders, 51 are considered political prisoners.

V- 07.15.19: The Georgian ambassador to Azerbaijan was summoned to the Ministry of Foreign Affairs of the country in connection with the violation by a group of persons on the state border of Azerbaijan from the Georgian side on July 14, their attack on the Azerbaijani border guard and insulting border guards serving at the Keshikchidag cave complex. The ambassador was asked to clarify the matter, the press service of the Azerbaijani Foreign Ministry said.

VII- 10.19.19: An attempt was made to hold an unauthorized rally of the National Council of Democratic Forces in the Baku downtown, which was severely suppressed.

VIII- 10.29.19: Human rights activist Ogtay Gyulalyev was hit by a car. Because of a severe brain injury, he fell into a coma.

IX- 11.22.19: The Head of the Russian Federation, Vladimir Putin, received in Novo-Ogaryov the First Vice-President of the Republic of Azerbaijan Mehriban Aliyeva, who was on a state visit to Russia.

X- 12.05.19: By order of the head of state Ilham Aliyev, early parliamentary elections in Azerbaijan are scheduled for February 9, 2020.

The year 2019 was characterized by two important milestones that were interconnected and mutually influential. The talk is about a marked increase in public discontent and pressure on the authorities, on the one hand, personnel and institutional changes in the system of power, on the other.

The year began with international and public pressure on the regime, which manifested itself in the decision of the European Parliament on January 17 demanding the release of blogger Mehman Huseynov and the opposition rally dated January 19, which resulted in a wider public protest than the authorities expected. Citizens dissatisfied with the social situation joined the opposition.

Such events caused subsequent decisions and decrees of President Ilham Aliyev of a social nature, including raising minimum wages, pensions, writing off a certain part of citizens’ loans that were formed because of the devaluation of the manat in 2015.

However, despite this, public sentiment continued to aggravate, which was reflected in the increased activity of protest sentiments on social networks and numerous attempts of the opposition to organize authorized rallies, which were prevented by the authorities.

The culmination of a clash of power and the opposition, with the participation of discontented layers of society, took place on October 19, when supporters of the National Democratic Forces rally came to an unauthorized rally. The rally was harshly suppressed, mass arrests were made, and the head of the Popular Front Party, Ali Kerimli, was detained, and was subjected to physical and moral violence. These were followed by an unauthorized picket of the Musavat party and a demonstration of the consolidation of the opposition in the framework of the round table, on which it declared its readiness to unite for a consolidated struggle.

In this situation, the authorities decide to hold early parliamentary elections on February 9, thereby this tactical step on the one hand practically prevented the consolidation of the opposition in the short term due to the fact that some of the participants in the process decided to go to the polls and the other part announced their boycott . On the other hand, this decision of the president actually summed up the course on reformatting the power system, where in 2019 the institution of the first vice president Mehriban Aliyeva noticeably strengthened, which began to play a significant role in the personnel and institutional reformatting of the power system.

This year such important persons as the head of the presidential administration “gray cardinal” Ramiz Mehdiyev, omnipotent head of the Ministry of Internal Affairs Ramil Usubov, assistant to the president on socio-political issues “ideologist” Ali Hasanov left their posts. The government was headed by Presidential Advisor on Economics Ali Asadov, while other departments were taken by experienced and younger cadres from the First Lady’s reserve.

In fact, the reformatting of the parliamentary staff is a necessary part of this process, since it is expected that people that correspond to the vision of the first vice president, and are ready to support further reform of the political system will come to power.

In this sense, 2020 will be a continuation of 2019, when perestroika will affect both the personnel segment and the management system, as well as relations – political, economic, public, information. In a word, all areas. However, it would be difficult to say whether it would be called reforms. No programs in this regard were accepted. Most likely, their formation will begin after the parliamentary elections.

In the foreign policy, the perestroika steps of the authorities were understood and supported by all the centers of power. This was expressed in the warm welcome of Mehriban Aliyeva in Paris, Moscow and in the tacit consent of Washington, which does not interfere with the power changes in Azerbaijan. Understanding the importance of the perestroika processes in the corridors of power in the past year has pushed into the background the problem of the Karabakh settlement and European integration. This situation will continue until the parliamentary elections, after which the external centers of influence will recall bilateral obligations and the need for their implementation.