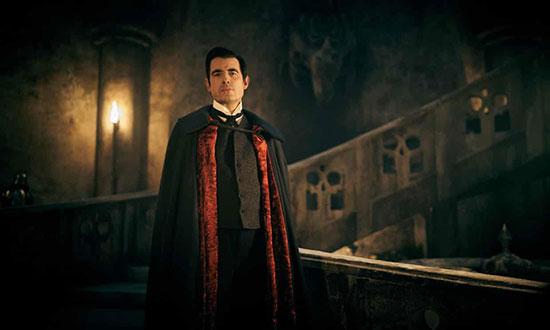 Fun, smart, scary and with just the right whiff of ham … Steven Moffat and Mark Gatiss have served up a diabolic luxury

Do you want to have some FUN this Christmastide?

Do you like RIPPING YARNS? Do you think there’s no greater pleasure than a brilliant story brilliantly told?

You do? Well, have I got good news for you. Which is: BBC One’s new series Dracula is a pure and joyous BELTER. It’s in three parts of 90 glorious minutes each, adapted by Steven Moffat and Mark Gatiss. And it is basically Sherlock but about Dracula. And peak Sherlock at that: seeking always to entertain the audience, revitalising the story while revelling in its absurdity, clever without being clever-clever, and strewn with comic and dramatic flourishes that give you the feeling that this is not just a treat but a tribute – to the author, to the season, to you as an intelligent viewer.

It’s a proper job, is what I’m saying. And that means proper scares. No spoilers, but the one in the [redacted] when the [redacted] suddenly [redacted] had me clinging to the ceiling. I advise parental supervision at all times. My dad was annoyed at having to come over, but needs must when the devil calls and starts emanating from your screen.

The story unfolds within two timeframes, the Now and the Then. In the Now, where we begin, a strangely deformed man is being interviewed in a nunnery by Sister Agatha (Dolly Wells) who – and I’m calling it now – is quite the best nun of all time, and not just because she has no time at all for God. “Like many women my age I am trapped in a loveless marriage, maintaining appearances for the sake of a roof over my head,” she says briskly. She is investigating the man’s tale of escape from someone he calls Count Dracula. The man’s name is Jonathan Harker and he is played by John Heffernan with the same utter conviction brought to the story by the rest of the cast via a script and direction that are all refreshingly devoid of any shred of cynicism. You may point, as apparent disproof of my assertion, to Sister Agatha’s response to Harker’s failure to realise the significance of an SOS message written in English in the heart of eastern Europe: “You are an English man,” she explains. “A combination of presumptions beyond compare.” But you would be wrong. She is simply a truth-teller, unfettered by convention. This is quite different. Also, top nunning. I will brook no riposte.

Harker was brought by a fisherman to the nunnery, having been found washed up on the banks of a nearby river muttering about forces of evil. He looks a half-formed thing – bald and white and smooth, a cross between Voldemort and Ryan Reynolds’ irradiated Deadpool – as well, it turns out, he might.

Harker is a lawyer who was sent to talk a mysterious client through some legal issues at his castle. That’s the Then. The client is an unsettling, old, old man with a – Transylvanian, is it? – accent who says exactly the things you want an old, old man with a Transylvanian accent and an unmappable castle to say. Things such as “I don’t drink … wine”, and “The people around here have no flavour”. “Perhaps you mean ‘character’?” suggests Harker gently. “Perhaps,” replies the old, old man. When asked if there is anyone else living in the place, he replies “No. There’s no one … living here.” It is around this point that you find your bum wriggling its way more firmly into the sofa.

The client takes a shine to him, and so Harker must stay. His health fails, he gets weaker by the day – but the years fall away from Dracula until he stands revealed as Danish actor Claes Bang, embodying exactly the wolfish charm and diabolic spirit you love to see in a prince … wait, what am I saying?! The prince of darkness.

It’s a bloodstained love letter to a classic, beautifully and delicately scented with just the faintest hint of ham gothic yarns need; a homage to all the great Counts who have gone before, but still entirely its own thing. And again, like the best of Gatiss and Moffat’s Sherlocks, with the searching intelligence that promises to flesh out the foundational story. Enjoy sinking your teeth into it all.