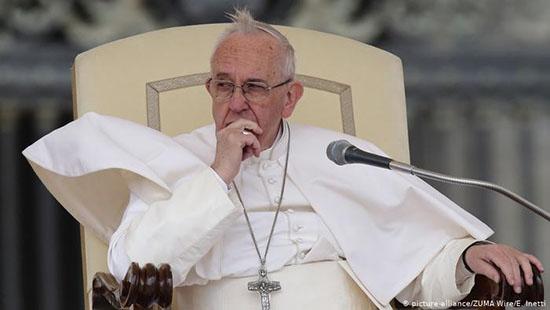 Pontiff admits ‘sometime even I lose patience’, referring to incident with pilgrim at Vatican

Pope Francis has apologised after slapping a woman’s hand as he greeted pilgrims at the Vatican on New Year’s Eve.

‌Francis lost his cool when the woman abruptly grabbed his hand and yanked him towards her just after he reached out to greet a child during a visit to the Vatican’s nativity scene on Tuesday night.

The woman would not let go and in a gesture that appeared to cause him pain, he slapped at her hand before pulling his hand free.

During his Angelus address to a packed St Peter’s Square on New Year’s Day, the pontiff referred to his actions. “I apologise for the bad example yesterday … sometimes even I lose patience,” he said.

The identity of the woman is unknown, but a video of the incident went viral, prompting indignation on social media. One Twitter user wrote: “What the pope did demonstrates one thing – he’s a man.”

In his address on Wednesday morning, the pope also condemned violence against women. He said: “By how we treat a woman’s body, we can understand our level of humanity.”

In another clip that went viral in 2019, Pope Francis repeatedly yanked his hand away from being kissed as a long queue of people came up to him. The waiting pilgrims had been attempting to kiss his papal ring as part of a tradition, practised by more conservative Catholics, to show respect to the pontiff. A few days after the incident, the Vatican said Francis had been worried about spreading germs. However, experts said at the time that his reluctance to have his papal ring kissed reflected an uneasiness with an element of traditional protocol that had lost its original meaning.

Some 420,000 people integrate their driving licenses with ID cards