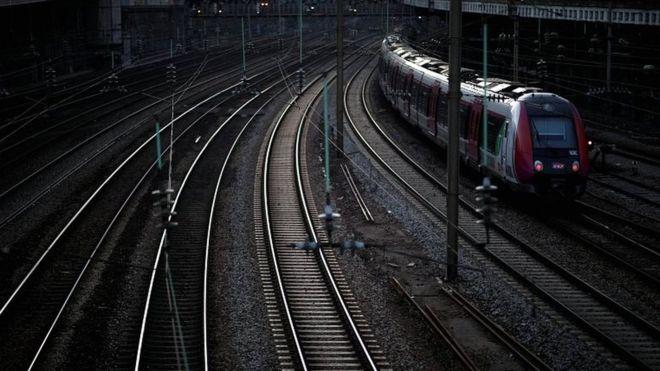 BBC.Com-France’s transport strike against pension reform has entered its 29th day, making it the longest rail workers’ strike since May 1968.

The government says the changes are necessary to make the system fairer and more sustainable, but unions say workers will lose out.

More talks are due to be held between unions and government on 7 January.

In his New Year’s Eve address on Tuesday, Mr Macron vowed not to back down on his plan to overhaul France’s complex pension system that would require people to work longer.

“It would be a betrayal of our children, their children after them, who would then have to pay the price for our giving up,” he said.

Union leaders have called for a day of mass protests on 9 January. A new blockade of petrol facilities, including refineries, petrol terminals and depots, is also planned on 7 January for 96 hours until 10 January.

On Thursday, France’s national rail operator SNCF said it expected up to half of high-speed trains to be cancelled; only one in four inter-city trains would be running, while regional rail services would also be badly affected with half of suburban trains cancelled and only a third of trains circulating in the Paris region.

Most lines on the Paris metro were expected to be open, although disruption was expected.

A poll carried out before Christmas showed the industrial action was still supported by the majority of the public.

Nationwide strikes against the plans have caused weeks of disruption.

Many French people hoping to spend the holidays with family and friends found themselves stranded because of cancelled trains and gridlocked roads, while hundreds of flights were also cancelled.

It has been deemed the longest strike since May 1968, a period of civil unrest across the country.

A general strike over pension reforms in France in 1995 also crippled the transport system for three weeks and drew massive popular support. In that instance, the government was forced into a U-turn.

What is the strike about?

Unions representing millions of staff in both the public and private sectors warn the move will remove the most advantageous pensions for a number of jobs and force people to work longer or face reduced payouts when they retire.

France raised the official retirement age in the past decade from 60 to 62, but it remains one of the lowest among rich countries – in the UK, for example, the retirement age for state pensions is 66 and is due to rise to at least 67.

In November, a report commissioned by French Prime Minister Édouard Philippe concluded that, under the existing system, the country’s pension deficit could be as high as €17.2bn by 2025.