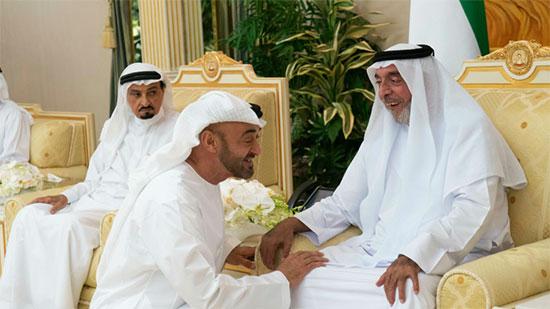 This is the second visit to Pakistan by an Arab leader in the past two weeks.

Sheikh Mohammed bin Zayed Al Nahyan, the crown prince of the United Arab Emirates and deputy supreme commander of the UAE Armed Forces, arrived with a high-level delegation for a day-long visit in Islamabad on Thursday afternoon.

Pakistani Prime Minister Imran Khan received the crown prince at Noor Khan Air Force Base. Khan himself drove the car and transported Al Nahyan to the Prime Minister’s Residence after his red carpet welcome at the airbase.

Later, Khan hosted a lunch in honor of the crown prince.

The crown prince departed on Thursday evening after completing his one-day visit to Pakistan.

Al Nahyan was the first global leader to visit Pakistan in 2020. He also visited the country on January 5, 2019 – likewise, the first visit of a foreign dignitary to Pakistan that year.

Hamad Obaid Ibrahim Al-Zaabi, the UAE ambassador in Pakistan, said in a press release that “Prince Mohammed will be in the country for one day and will meet Prime Minister Imran Khan.”

“Both leaders will discuss relations between the two countries, as well as the state of regional and global politics. They will also talk about strengthening the bonds of friendship between the two brotherly countries,” Al-Zaabi said.

After taking over the prime minister’s office in 2018, Khan has twice visited the UAE. During these visits, both sides agreed to renew bilateral relations and to build a comprehensive framework for trade, investment and development.

After the January 5 visit, Pakistan Today reported that in a joint statement, “PM Imran thanked the crown prince for the ‘generous’ balance-of-payments support of $3 billion, which appears to have materialized first out of the total $6.2bn financial package.”

The package included $3 billion in cash to Pakistan and $3 billion worth of oil supplies on a postponed payment basis.

This is the second visit to Pakistan by an Arab leader in the past two weeks. Saudi Foreign Minister Faisal bin Farhan Al-Saud also visited Pakistan on December 26, sparking tensions when Turkish President Recep Tayyip Erdoğan blamed Saudi Crown Prince Mohammad bin Salman for pressing Pakistan to withdraw from the Kuala Lumpur summit. The summit was seen as an attempt to create a new bloc to replace the dysfunctional Saudi-led Organization of Islamic Cooperation.

Tasnim Aslam, a seasoned Pakistani diplomat, ambassador, and Foreign Ministry spokesperson, told The Media Line that “Pakistan has good relations with the UAE spanning over decades. Cooperation between the two countries has been for mutual benefit.”

Aslam further said that “in the early years, Pakistan helped the UAE in diverse fields including in establishing its airlines.”

Responding to a question from The Media Line about the UAE’s close ties to India, she said that they are “well known. These are primarily economic but they often talk about their ‘strategic partnership,’ whatever that means.” There is also a large and influential Indian diaspora in the UAE, she said.

She further told The Media Line that “the silence of countries like the UAE over the continued oppression of the people of Indian-controlled Kashmir and enactment of patently discriminatory laws against Muslims is indeed disappointing.”

Michael Kugelman, the deputy director of the Asia Program and senior associate for South Asia at the Washington-based Woodrow Wilson International Center for Scholars, told The Media Line, “The UAE, like most of the Arab Gulf states along with Iran, enjoys good relations with both India and Pakistan.”

“New Delhi and Islamabad both seek strong ties with these nations, mainly because of energy security considerations but also because of broader investment needs,” Kugelman noted. He further said that “the UAE and its ilk are quite aware of this, and so it’s natural that they would want to work with both India and Pakistan and play each against the other by dangling economic support to both of them.”

Kugelman also told The Media Line, “I don’t think this visit by the crown prince will have much of an impact on geopolitics or the highly tense India-Pakistan relationship. If India is going to get upset at Pakistan about something, it would take a lot more than the visit of a crown prince from Abu Dhabi.”

Javed Qaiser, an Islamabad-based regional political expert, told The Media Line that he doesn’t think the crown prince is coming to “bail out Pakistan from the balance of payment crisis.”

Qaiser also told The Media Line that “the crown prince’s visit may be a continuation of the Saudi foreign minister’s recent visit to keep Pakistan away from the new Turkey-Malaysia-led Islamic bloc and to advise Pakistan to refrain from pursuing its media campaign against Indian atrocities meted out on Kashmiris and against the controversial, discriminatory and widely criticized citizenship law passed by India.”

Salman Hashmi, an Islamabad-based diplomatic expert, told The Media Line that “in fact, the UAE was the first country to help Pakistan pull itself out of an extreme financial crisis in 2019.”

“The UAE is supplying India with oil to meet its significant energy needs. And the UAE’s economy relies on cheap Indian labor, which contributes vastly to UAE-based companies,” said Hashmi.

“It is on record that the UAE never either supported or criticized human rights violations in Indian-held Kashmir,” said Hashmi. “The UAE also bestowed its highest civilian award to Indian Prime Minister Narendra Modi, which fueled anger in Islamabad.”

“Recently, the United Arab Emirates strongly supported the Pakistan Army in the reconstruction work done in areas that were badly damaged during the various military operations against terrorists in the tribal areas of Pakistan. UAE foreign policy is quite independent and it is trying to maintain a balance,” he added.