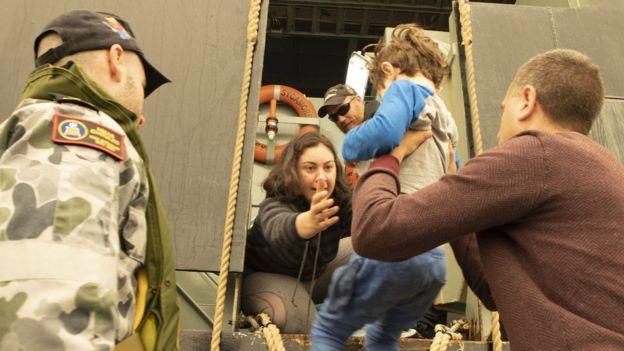 BBC.COM-Australian Prime Minister Scott Morrison has announced 3,000 troops will be deployed to help tackle raging bushfires across the country.

Defence Minister Linda Reynolds said this is the first time this has happened in Australia’s history.

Temperatures are expected to soar above 40C (104F) in parts of south-east Australia on Saturday. Officials warned that it is set to be a “dangerous day”.

Since September, fires in Australia have killed at least 23 people.

Speaking at a press conference on Saturday, Mr Morrison told reporters: “We have seen this disaster escalate to an entirely new level.”

Dozens of people are missing and some 1,500 homes have already been lost this fire season.

Authorities in south-east Australia are bracing for a weekend of high temperatures and strong winds, which are threatening to worsen bushfire conditions across the country.

What is the situation on Saturday?

The state has already declared a disaster in areas that are home to some 100,000 people and it had urged residents to leave. Twenty-one people remain unaccounted for in Victoria.

Some residents in the upper region of the Snowy Mountains have now been told it is too late to leave. The emergency services issued an alert to remaining residents, telling them to take shelter indoors as the conditions worsen.

Phone lines are down in some areas of the state, according to 9 News.

What other areas are affected?

On Friday, the Australian navy evacuated some 1,000 tourists and residents who were trapped in the fire-ravaged town of Mallacoota on the Victoria coast.

The first evacuees arrived in the Mornington Peninsula on Saturday morning.

Another ship, HMS Adelaide, will set sail from Sydney on Saturday and will be located offshore ready to evacuate citizens from the coast if needed.

In the state of South Australia, two people have died in a bushfire on Kangaroo Island.

A quarter of the island has been ravaged by fire. South Australia state premier Steven Marshall said much of Flinders Chase National Park had been “taken out” by bushfires.

New South Wales (NSW) has declared a week-long state of emergency. Tens of thousands of residents and holidaymakers were warned to evacuate coastal areas, where a “tourist leave zone” has been declared.

NSW Rural Fire Service Commissioner Shane Fitzsimmons has warned Saturday will be “a long and difficult day for everybody”.

More than one hundred fires are currently burning in NSW and, according to Mr Fitzsimmons, more than half are not contained.

“We know the fires we’ve got already.. .but what we need to be vigilant about today as well is the prospect of any new fires that might start under these hot, dry, windy conditions,” he said.

Some 3,000 firefighters are on the ground in NSW, according to News.com.au.

The fires in Australia began in September. In addition to the fatalities, they have so far destroyed more than 1,300 homes, as well as millions of acres of bushland.

Meteorologists say a climate system in the Indian Ocean, known as the dipole, is the main driver behind the extreme heat in Australia.

However, many parts of Australia have been in drought conditions, some for years, which has made it easier for the fires to spread and grow.

Prime Minister Scott Morrison has been criticised for his response. In a news conference on Friday, he said he understood that people had “suffered a great lot” and were “feeling very raw”.