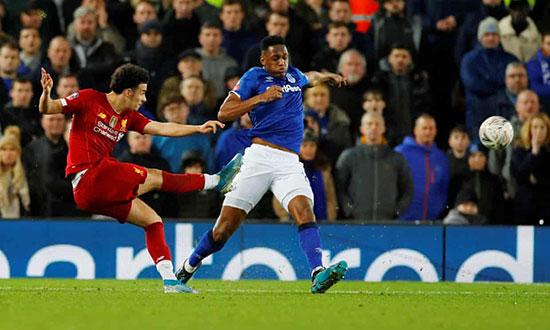 David Hytner at Anfield   – The  Guardian

Curtis Jones scored the decisive goal in the Merseyside derby, bending a peach of a shot past Jordan Pickford into the top corner. Photograph: Phil Noble/Action Images via Reuters

Curtis Jones knew exactly what he wanted to do and so did the whole of Anfield. It is one thing to think it and quite another to execute but that is precisely what the 18-year-old Liverpool midfielder did. Accepting the ball from Divock Origi on the edge of the Everton penalty area, to the left of centre, Jones shaped to bend a right-footed shot into the far top corner of the net.

It arched in exquisitely, kissing the underside of the crossbar on its way down and in past Jordan Pickford for an added show-stopping touch, and the Liverpudlian had a first senior goal to savour. It deserved to be the winner and it was, as Jürgen Klopp’s selection gamble paid off handsomely.

With injuries to contend with plus many players in the red zone, the Liverpool manager had rotated heavily, starting with three teenagers and five players with minimal first-team experience, including the debutant centre-half, Nathaniel Phillips. It was only Jones’s third career start.

That they still got the job done to advance into the fourth round of the FA Cup was a source of pride to Klopp and the club’s support but one of bitter frustration to Everton. The visitors have not won at Anfield since 1999 and, to put it bluntly, they had a golden chance to end the sequence. Carlo Ancelotti, the new Everton manager, had gone with a full-strength lineup.

But after creating chances during a first-half that they could claim to have had the better of, they flatlined after the interval, barely laying a glove on their rivals. Liverpool were the more cohesive team throughout and the celebrations at full-time, led by Klopp, provided the latest snapshot in what has come to feel like a fairytale season.

Klopp was always going to make major changes given that the FA Cup lags a distant third in his priorities for the second half of the season, and his selection was always going to shape the story. His team would become even more callow as early as the eighth minute when the captain James Milner was forced off, replaced by the 19-year-old Yasser Larouci at left-back for his debut.

Everton had to have felt the knock of opportunity when the teamsheets dropped – some bookmakers had them close to being the favourites – and they created chances at the outset to fire the optimism of their 8,000 travelling fans. It would prove to be a false dawn. They were clear chances, too, none more so than Mason Holgate’s header from Gylfi Sigurdsson’s free-kick. Holgate simply ran through a static Liverpool defensive line but his free header was straight at Adrián.

The Liverpool goalkeeper had earlier been called upon to block from Dominic Calvert-Lewin after Theo Walcott had chased Sigurdsson’s ball over the top and it was in trying to repel that danger that Milner hurt himself.

Klopp started the new signing, Takumi Minamino, as the central attacker in his 4-1-2-3 system, which featured Pedro Chirivella as the deep-sitting midfielder, and his team settled after the first 10 minutes or so. There was comfort on the ball, particularly from Chirivella and Jones, and the home crowd responded to their energy. Klopp had said in his programme notes that he would never accept any opposing team working harder than his and those in red made sure that they were beyond reproach in terms of the fundamentals.

Could they find any punch up front? Minamino almost did in the 35th minute from Origi’s cross but failed to make a clean connection on his header, and there was the moment shortly afterwards when Origi twisted one way and then the other before unloading a shot for the far corner. Pickford got down to make an excellent save. Origi had looked offside when he received the ball from the 16-year-old, Harvey Elliott, but the flag stayed down and it would have counted.

Everton had the quality to hurt Liverpool, with Walcott teeing up Richarlison superbly with a pull-back on 28 minutes – Adrián saved smartly with his legs to deny the Brazilian – while Calvert-Lewin could not quite stretch far enough to connect with a diving header. But there were also poor final decisions from them – Walcott was the chief culprit – which had Ancelotti spinning on his heels in annoyance.

Klopp could enjoy the way that his team played on the front foot, hogging possession. It was a fine advertisement not only for the club’s strength in depth but the hunger that runs through it. That starts with Klopp.

The Kop made the point midway through the second-half that Everton had “hardly touched the ball”, and it was certainly hard for their support to see the way Liverpool forced the issue. Ancelotti acted. He had set up in a 4-2-3-1 formation, with Walcott behind Calvert-Lewin, but he switched to 4-4-2, the system that he had started with in Everton’s previous three games, bringing on Moise Kean as the extra striker.

Klopp made a change too, sending on Alex Oxlade-Chamberlain in midfield and asking Jones to push further forward. Almost immediately, the youngster made his mark. If it was yet more evidence of Klopp’s midas touch, it was primarily a Roy of the Rovers moment for Jones. The technique and precision of the shot was breathtaking. Liverpool march on.