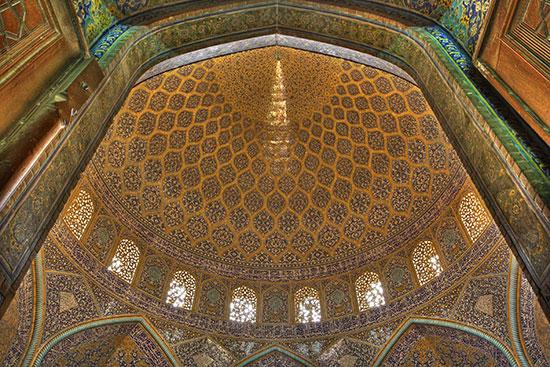 The US president has warned Iran he will obliterate its cultural sites. Here is our guide to the nation’s jewels, from hilltop citadels to a disco-ball mausoleum

Inside the Sheik Loftallah mosque, in Isfahan, Iran. It is a Unesco world heritage site. Photograph: BornaMir/Getty Images/iStockphoto

If carried out, Donald Trump’s threat to target “cultural sites” in Iran would put him into an axis of architectural evil alongside the Taliban and Isis, both of which have wreaked similar forms of destruction this century. The Taliban dynamited Afghanistan’s sixth-century Buddhas of Bamiyan in 2001; Isis has destroyed mosques, shrines and other structures across Iraq and Syria since 2014, some in the ancient city of Palmyra. Not, you might have thought, company the US president would prefer to be associated with.

Does Trump know what would be lost? Probably not – but he’s hardly the only one. The fact that the country is rarely visited by western tourists is not due to a lack of attractions. With a civilisation dating back 5,000 years, and over 20 Unesco world heritage sites, Iran’s cultural heritage is rich and unique, especially its religious architecture, which displays a mastery of geometry, abstract design and pre-industrial engineering practically unparalleled in civilisation. This is is not just Iran’s cultural heritage, it is humanity’s.

The jewel in Iran’s archaeological crown: a monumental complex dating back to the sixth century BC that was designed to impress – with a vast raised terrace, grand staircases and marble palaces and temples. The city has been sacked by numerous visitors, starting with Alexander the Great, but much still remains for Trump to obliterate, including some incredibly well-preserved statues and bas reliefs of bulls, lions, mythical creatures and citizens of the multicultural Achaemenid empire.

The name translates as “King of the Light” and with good reason. Relatively typical-looking from the outside, this mausoleum’s interior is entirely covered in intricate geometric designs of mirrored mosaic tile, creating a cosmic, otherworldly lightshow. It is a sombre place of pilgrimage but the effect has been likened to being inside a giant, Islamic disco ball. Just the sort of thing a hotelier with a penchant for shiny things might appreciate.

Iran has a long Christian history, particularly associated with Armenia at its northwestern border. Three of the oldest churches in the region are Unesco world heritage sites. Vank Cathedral, near Isfahan, was built by Armenians fleeing the Ottoman wars in the 17th century. The interior is a riotous patchwork of frescoes and gilded carvings.

Western visitors marvelled at the beauty and sophistication of the long, covered bridges of Iran’s former capital, mostly built during the 17th century. They are feats of engineering but also pure functionality. The stately, 130m-long Khaju Bridge, for example, served as a dam and sluice gate to control the Zayanderud river as well as a way to cross it, while its central aisle was a shaded public meeting space boasting a tea house.

Not the largest mosque in the city but one of the most stupendously ornate, since it was built for the royal court rather than the general public. Its interior contains some of the finest tilework to be found anywhere in the world, especially the dome with its unfathomably complex geometric patterns, said to resemble a peacock’s tail – testament to untold millions of hours of care and labour.

This is the largest mosque in the world, one of the holiest sites in the holiest city in Iran, with over 25 million visitors a year. The destruction of this mosque complex would be unforgivable to many of the world’s Muslims. As well as the tomb of Imam Reza, the eighth Shia imam, and numerous other religious figures, the complex is home to mosques, courtyards, a madrasa, and a museum containing priceless historical artefacts.

The first capital of the Achaemenid empire, built by Cyrus the Great in a distinctive style, with spectacular columned palaces and other buildings laid out across large gardens divided by waterways. This influential Persian garden style was a prototype for Asian design, the inspiration for India’s Taj Mahal and Spain’s Alhambra. The buildings are mostly remnants, though one surviving structure is the supposed tomb of Cyrus himself.

Even if he hasn’t actually read his supposed favourite book – The Bible – Trump is likely familiar with Daniel, AKA that dude with the lions. He might be surprised to discover Daniel – a prophet in Islam as well as Christianity – is presumed to be buried in the ancient Iranian city of Susa. Daniel’s Tomb, with its distinctive conical dome, was first chronicled in the 12th century and is still a popular pilgrimage site.

The Citadel of Bam

The largest adobe building in the world, dating back to the sixth century BC. It is more a hilltop town than a single structure, spread across 180,000 sq metres (44 acres), with a central fortress surrounded by streets, houses and bazaars, all surrounded by seven metre-high walls. Bam was largely destroyed in an earthquake in 2003 but reconstruction has been going on ever since.

Another example of ancient Iranian excellence in both engineering and style. This 50 metre-tall funerary tower dates back to the early 11th century, and a millennium later it is still apparently the tallest brick tower in the world. The design is beautifully austere, a 10-pointed star in plan, with a conical roof, completely plain save for two bands of calligraphy around the bottom and the top.