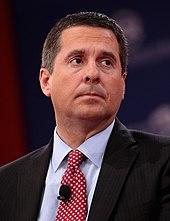 House Intelligence Committee Republicans are investigating the intelligence community inspector general for his handling of the Ukraine whistleblower complaint, including potential inconsistencies in his testimony before the panel as part of the Trump impeachment inquiry, Fox News has learned.

A source familiar with the committee’s investigation on Tuesday went into further detail, telling Fox News that Republicans are looking at the ICIG’s handling of the whistleblower complaint that sparked the impeachment inquiry into President Trump; the veracity of his testimony about the whistleblower complaint; and the explanations he offered for changes made to the ICIG’s guidance on accepting second-hand information.

In August, Atkinson received a complaint from an individual raising concerns about Trump’s July 25 phone call with Ukrainian President Volodymyr Zelensky in which he pressed Kiev to launch investigations into the dealings of former Vice President Joe Biden and his son Hunter Biden in Ukraine, as well as issues related to the 2016 presidential election.

The president’s request came after millions of dollars in U.S. military aid to Ukraine had been frozen, which Democrats argue shows a “quid pro quo” arrangement. Trump has denied any wrongdoing.

Republicans for weeks have complained that the whistleblower made contact with Intelligence Committee Chairman Adam Schiff’s, D-Calif., staff in advance — though Schiff has downplayed the nature of that contact.

Whether Republicans are looking further into that contact as part of their review is unclear. But since last fall, they have specifically challenged intelligence community officials over changes to a key form that dropped a requirement for “first-hand information” in whistleblower complaints.

The White House released a declassified version of the complaint, which revealed that the whistleblower’s concerns stemmed from second-hand accounts from “more than half a dozen U.S. officials.”

The declassified whistleblower complaint, though, stated: “I was not a direct witness to most of the events described. However, I found my colleagues’ accounts of these events to be credible, because, in almost all cases, multiple officials recounted fact patterns that were consistent with one another.”

Republicans have previously questioned whether the timing of the form revision was related to the Ukraine complaint.

Meanwhile, Atkinson found that the whistleblower showed indications of “political bias” and was “in favor of a rival political candidate,” while still deeming the complaint a matter of “urgent concern.”

The Justice Department Office of Legal Counsel later released a contrary opinion determining that the complaint did “not involve an ‘urgent concern’” and did not require that the director of national intelligence “transmit the complaint to the intelligence committees.”

The timeline for the Intelligence Committee Republicans’ investigation into Atkinson is unclear.

A spokesman for Atkinson declined to comment for this report.

Fox News’ Gregg Re contributed to this report.