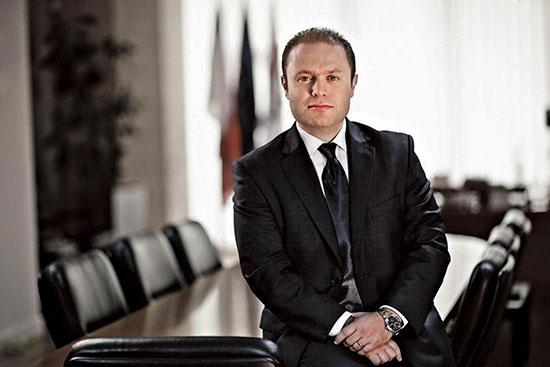 A murdered journalist. Shady offshore deals. A tiny nation in the grip of large-scale criminal interests.

These are the leading factors behind the selection of Maltese Prime Minister Joseph Muscat as the OCCRP 2019 Person of the Year in Organized Crime and Corruption.

Under Muscat’s leadership, criminality and corruption have flourished — and in many cases gone unpunished — in the small Mediterranean archipelago of Malta, creating an environment that led to the 2017 murder of investigative journalist Daphne Caruana Galizia, investigators and government critics say.

The Maltese government’s investigation into the killing of the journalist, who exposed corruption at the highest levels of Muscat’s government, foundered for years. But that changed in November when authorities arrested the alleged mastermind, a Maltese businessman who is a close friend of Muscat’s longtime associate and former top aide, Keith Schembri. Schembri was recently detained and questioned in connection with the killing. Throughout the process, Muscat has been openly dismissive of the allegations and has refused to remove those involved from their government posts.

“Muscat has shown a total disdain for the media, free speech, and has allowed corrupt figures to order killings with impunity,” said Louise I. Shelley, the founder and director of the Terrorism, Transnational Crime and Corruption Center at the Schar School of Government and Policy at George Mason University. “OCCRP through this award honors the courageous investigators of the heinous murder and shows that the powerful can be brought to account.”

Shelley is one of eight experts in the field of organized crime, corruption, and terrorism who sat on the judging panel that unanimously named Muscat the OCCRP Person of the Year. The annual award shines a light on the individual or institution that has done the most to advance organized criminal activity and corruption in a given year.

Other finalists for 2019 included:

In the end, the OCCRP panel believed the actions of Malta’s prime minister constituted the most extreme form of corruption.

“Failed political leadership, as exercised by this man, represents the current crisis that is shaking the foundations — freedom of speech and rule of law — of the European Union,” said Saska Cvetkovska, editor-in-chief of the Investigative Reporting Lab in Macedonia and a member of OCCRP’s board of directors.

When these foundations are jeopardized, it allows corruption to go unchecked, she said.

Caruana Galizia and fellow journalists regularly reported on how Malta under Muscat had become a haven for organized crime and corruption: golden visa fraud; smuggling of weapons, oil, drugs, and people; illegal fishing; money laundering; and allowing Italian criminal groups to operate extensively from the country. Journalists complained that instead of investigating their claims, Muscat’s government bullied them. Caruana Galizia at the time of her death faced dozens of lawsuits, including by Muscat himself.

Her reporting raised particularly serious questions about Muscat’s ties to organized crime and corruption in February 2016, when she broke a story alleging money laundering by a number of Maltese politicians. Among those she identified was Schembri, Muscat’s chief of staff and right-hand man.

Following Caruana Galizia’s death from a car bomb in October 2017, 45 journalists representing over a dozen international news organizations, led by Paris-based Forbidden Stories, continued her work. Reporters from Reuters, the Guardian, Süddeutsche Zeitung, and OCCRP, among others, worked on The Daphne Project, which helped expose information that backed Caruana Galizia’s original reporting and advanced the story.

They revealed that two Maltese politicians — Schembri and Konrad Mizzi, Muscat’s former energy minister— expected to receive payments from 17 Black through companies they owned in Panama. They also found that another Fenech-owned company had won a key government concession to build a large power plant.

Last month, Fenech was arrested on his yacht while attempting to sail away from Malta. He has been charged with participating in a criminal organization, complicity in causing an explosion, and complicity in the murder of Caruana Galizia. He has pleaded not guilty.

Fenech’s arrest came one day after an alleged middleman, Melvin Theuma, was offered a pardon in exchange for identifying the mastermind of Caruana Galizia’s murder. Shortly afterwards, Schembri was also detained and questioned,for alleged involvement in the killing before being released. In mid-December, the lead investigator in the case told a Maltese court that Schembri was under investigation for homicide and tampering with evidence. He has denied any wrongdoing.

Nearly 20,000 people took to the streets on December 1 in Malta’s capital city, Valletta, demanding justice for Caruana Galizia and calling for Muscat’s resignation after he denied Fenech’s request for immunity in exchange for information about the case, including possible ties to senior government figures.

Muscat has announced he will step down in January, after nearly seven years as prime minister.

Since 2012, OCCRP has named a Person of the Year in Organized Crime and Corruption from nominees put forward by journalists and members of the public. Last year, it named Danske Bank for its role in a massive money laundering scandal.

OCCRP is a non-profit media organization providing an investigative reporting platform for a network of 45 non-profit investigative centers in 34 countries, scores of journalists, and several major regional news organizations across Europe, Africa, Asia, the Middle East, and Latin America.