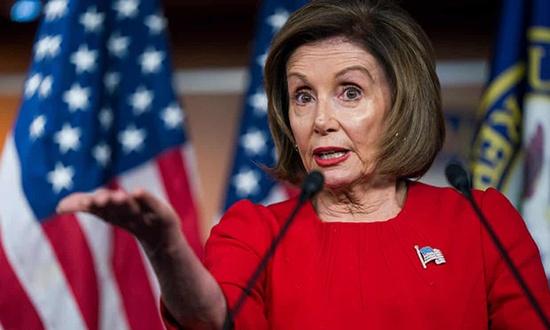 The House of Representatives will vote on a War Powers resolution this week “to limit the President’s military actions regarding Iran,” Speaker Nancy Pelosi said Sunday.

The move to curtail President Donald Trump’s ability to act unliterally is designed to force Republicans in the Senate to address the heightened tension with the Middle Eastern nation.

“Last week, the Trump Administration conducted a provocative and disproportionate military airstrike targeting high-level Iranian military officials,” Pelosi wrote in a letter announcing the legislation to her colleagues Sunday night. “This action endangered our service members, diplomats and others by risking a serious escalation of tensions with Iran… we are concerned that the Administration took this action without the consultation of Congress and without respect for Congress’s war powers granted to it by the Constitution.”

The legislation, which is privileged, forces the GOP-led Senate to vote on the matter, teeing up a political battle over whether to reign in a president’s ability to circumvent the Legislative Branch when conducting foreign military action. It comes amid intensified tensions with Iran after the weekend’s U.S. airstrike in Iraq that killed one of Iran’s top military generals, Qassem Soleimani.

The House returns from Christmas recess Tuesday. The office of Majority Leader Steny Hoyer (D-MD) was not yet sure which day the vote will take place.

“It reasserts Congress’s long-established oversight responsibilities by mandating that if no further Congressional action is taken, the Administration’s military hostilities with regard to Iran cease within 30 days,” Pelosi wrote.

The resolution will be introduced by Rep. Elissa Slotkin, Pelosi said, who is a freshman vulnerable Democrat from Michigan. She’s also a former Middle East analyst for the CIA and former acting Assistant Secretary of Defense for International Security Affairs. The legislation, which aims to “force a debate and vote in Congress to prevent further escalation of hostilities with Iran,” will mirror Sen. Tim Kaine’s (D-VA) war powers resolution.

The war powers resolution will seek to curtail the president’s ability to take military action abroad without congressional authorization. Without approval from Congress, the administration would have to end its military action in the region within 30 days.

Trump did not notify the so-called Gang of Eight—the top lawmakers in each chamber and the leaders of the House and Senate’s Intelligence Committees—about the drone strike that killed Soleimani, a courtesy that is typically extended to Washington’s leaders by a president.

Top Democratic lawmakers in the Gang of Eight, including Pelosi and Senate Minority Leader Chuck Schumer (D-NY), were not given notification, which angered Democrats in Congress. It was not clear which Republicans were told about the decision, but House Minority Leader Kevin McCarthy (R-CA) appeared in a picture with the president at Mar-a-Lago amid Soleimani’s killing, and Sen. Lindsey Graham (R-SC) said publicly he was informed in advance.

Trump took the extraordinary move Sunday to claim on Twitter that his online posts “will serve as notification to the United States Congress that should Iran strike any U.S. person or target, the United States will quickly & fully strike back, & perhaps in a disproportionate manner.”

“Such legal notice is not required, but is given nevertheless!” he added.

Schumer and Sen. Bob Menendez (D-NJ), the top Democrat on the Senate Foreign Affairs Committee, demanded in a letter Monday that Trump declassify the notification that he sent to Congress over the weekend of the drone strike, which is required under the War Powers Resolution.

Senior adviser Kellyanne Conway classified Menendez’s demand as “chest-thumping.” She suggested that Democratic lawmakers, such as House Intelligence Chairman Adam Schiff (D-CA), a member of the Gang of Eight and who spearheaded the House’s impeachment inquiry, cannot be trusted.

“The man goes to bed with his earpiece and microphone on,” Conway told reporters.