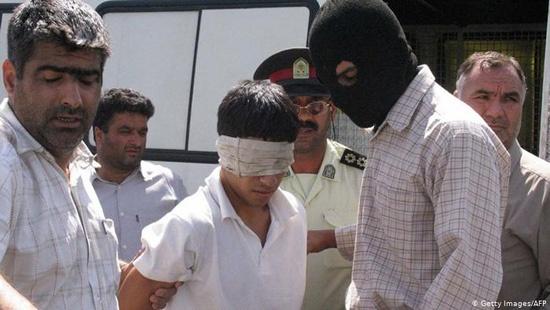 The US and Germany have condemned Iran after its foreign minister defended the policy of execution for homosexuality. The issue erupted after a pointed question from a German reporter.

A reporter from German tabloid Bild asked: “Why are homosexuals executed in Iran because of their sexual orientation?”

He responded: “Our society has moral principles. And we live according to these principles. These are moral principles concerning the behavior of people in general. And that means that the law is respected and the law is obeyed,” after railing against human rights violations by the US and Israel.

Maas, who was in Iran to negotiate the continuation of the nuclear deal, largely ignored the issue at the time.

Shadi Amin, an Iranian writer and activist who now lives in Germany, told DW-Farsi that she was “outraged” by the Iranian foreign minister’s comments. “Humiliation, repression and sexual harassment of a particular social group should be viewed critically and prohibited by law,” Amin said.

“Violating LGBT rights under the guise of ‘moral principles’ shows that Zarif doesn’t respect human rights. LGBT rights are human rights. Iran must not violate them by giving religious or cultural reasons,” she said. “New laws have made societies aware of the differences and accept them.”

“Many homosexuals tell us of abuse, torture and threats faced by their families and friends. As long as the country’s laws do not change, the situation of homosexuals in Iran will not improve,” said Amin.

The German Foreign Ministry’s Michael Roth later clarified to Bild: “LGBTI rights are human rights. And they have always been. Everywhere. No religious, cultural or ethnic tradition justifies state persecution, especially the execution of homosexuals. In Iran and seven other countries worldwide, homosexuals face the death penalty. That is inhuman and completely unacceptable.”

His comments came after Maas was criticized by German politicians for not addressing the issue at the time.

The US ambassador to Germany and the country’s most senior openly-gay official, Richard Grenell, on Wednesday slammed Iran for its position in comments to German and Israeli media.

“The Iranian regime has violated basic principles of the United Nations,” he told the German Press Agency (DPA).

“UN members should honor (the UN Universal Declaration of Human Rights) if they want to be members at all. The criminalization of homosexuality plainly violates this declaration.”

Homosexuality violates Islamic Law in Iran and can be punishable by death. Several thousand people have been executed for homosexuality since the 1979 Islamic revolution, according to some rights activists.